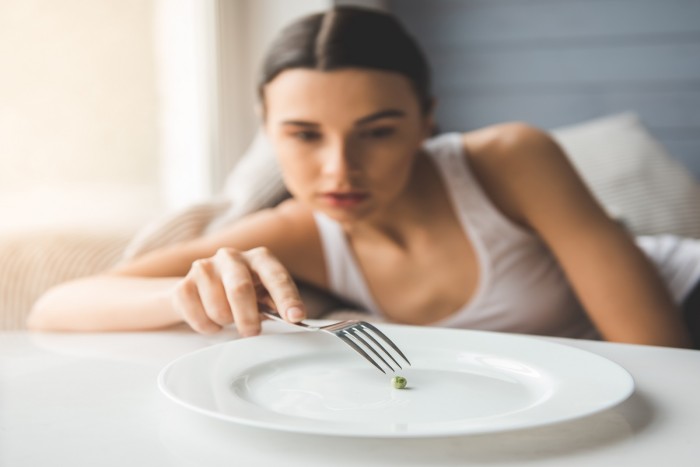 Obsessions with food, body weight and shape can be signs of an eating disorder, they can affect a person’s physical and mental health; in some cases, they can be life threatening.

Types and symptoms of an eating disorder

It is characterized by a persistent restriction in food intake, an intense fear of gaining weight or gaining weight, and a distortion of weight or body shape. A person with anorexia nervosa will maintain a body weight below a minimally normal level for age, gender, and physical health.

Some with anorexia lose weight by dieting, fasting, or exercising excessively; This is called restrictive type of anorexia, others lose weight from self-induced vomiting or misuse of laxatives, diuretics, or enemas. People who use these methods are considered to have the binge-eating type of anorexia.

It is characterized by recurrent and frequent episodes of ingesting unusually large amounts of food (binge eating) and by lack of control over food, this is followed by some type of behavior that compensates for the binge, such as vomiting, excessive use of laxatives or diuretics, fasting and / or excessive exercise. Unlike people with anorexia nervosa, people with bulimia maintain a body weight equal to or greater than a minimally normal level.

People with bulimia tend to be ashamed of their eating habits and try to hide their binge-eating symptoms in secret. The most common triggers for binge eating are negative affect (eg sadness, fear, guilt).

The disorder Binge eating a person feels is characterized by recurrent episodes of binge eating during which a loss of control over their eating. It can be defined as eating in excess of what most people would eat in a similar time frame under similar circumstances, unlike bulimia, binge-eating episodes are not followed by purging, excessive exercise, or fasting. As a result, people with binge eating disorder are often overweight.

Characterized by avoidance or restriction of food intake, people have a lack of interest in eating or avoid food based on negative past experience with food or sensory characteristics of food (e.g. appearance, smell , flavor, texture, presentation). This way of “eating” typically develops in childhood and can continue into adulthood. It can also be present in people with heightened sensory sensitivities associated with autism.

It is characterized by repeated regurgitation of food after eating, people with this disorder bring previously swallowed food to their mouth without showing any signs of nausea, this food is usually chewed again and spit or swallowed again. Spitting behavior is sometimes described as habitual or beyond the control of the individual.

The disorder can develop in infancy, childhood, adolescence, or adulthood. Babies with this disorder tend to tense up and arch their back with their head back, making sucking movements with their tongue. Malnutrition can occur despite the ingestion of large amounts of food, especially when regurgitated food is expelled, both in infants and in older people with intellectual disabilities, the regurgitation behavior appears to have a self-calming or self-stimulating function, very similar to other behaviors Repetitive motor skills (i.e. rocking, head banging).

Causes of an eating disorder

Researchers are unsure of the underlying causes and nature of eating disorders. Unlike a neurological disorder, which can generally be identified with a specific injury to the brain, an eating disorder probably involves abnormal activity distributed throughout the neural systems.

More researchers are using tools from modern neuroscience and modern psychology to better understand eating disorders. Also, they appear to be inherited, so research on genetic factors continues.

Other psychological, interpersonal, and social factors can play a role in eating disorders. Psychological factors that can contribute include low self-esteem, feelings of inadequacy or lack of control in life, depression, anxiety, anger, or loneliness.

Interpersonal factors include troubled personal and family relationships, difficulty expressing emotions and feelings, a history of teasing or ridiculing based on size and weight, or a history of physical or sexual abuse.

Social factors that may contribute include cultural pressures that glorify thinness and place value on obtaining the ‘perfect’ body, limited social definitions of beauty that include only women and men of specific body shapes and weights, or cultural norms that value women. people on the basis of physical appearance and not qualities and internal strengths.

Treatments and therapies for the improvement of an eating disorder

Proper nutrition, reducing excessive exercise, and stopping purging behaviors are the cornerstones of treatment. Treatment plans are tailored to individual needs and may include one or more of the following:

The psychotherapies , such as family therapy where parents of adolescents with anorexia nervosa assume responsibility for feeding their children, seem to be very effective in helping people to gain weight and improve eating habits and mood.

To reduce or eliminate bingeing and purging behaviors, people can undergo cognitive behavioral therapy , which is another type of psychotherapy that helps a person learn how to identify distorted or unhelpful thought patterns and recognize and change inaccurate beliefs.

Evidence also suggests that medications such as antidepressants, antipsychotics, or mood stabilizers approved by the US Food and Drug Administration may also be helpful in treating eating disorders and other co-occurring illnesses such as anxiety or depression.

Prevention aims to promote healthy development before the onset of eating disorders, it also aims to identify a disorder early before it is too late to treat it. Children between the ages of 5 and 7 know the cultural messages about body image and diet. Prevention comes in by bringing these problems to light.

The following topics can be discussed with young children (as well as teens and young adults).

Emotional eating: Asking children why they might eat in addition to being hungry, talk about more effective ways to deal with emotions, emphasizing the value of sharing feelings with a trusted adult.
Say no to teasing:  Another concept is to emphasize that it is wrong to say hurtful things about other people’s body sizes.
Body Talk:  Emphasizes the importance of listening to your own body, that is, eat when you are hungry (not starve) and stop when you are satisfied (not stuffed). Children intuitively understand these concepts.
Fitness comes in all sizes: Educate children about the genetics of body size and the normal changes that occur in the body, discuss their fears and hopes of growing larger. Focus on fitness and a balanced diet.