Skip to content
PsychoTreat > Psychology > What is Jealousy? – Causes, Behavior Problems And More 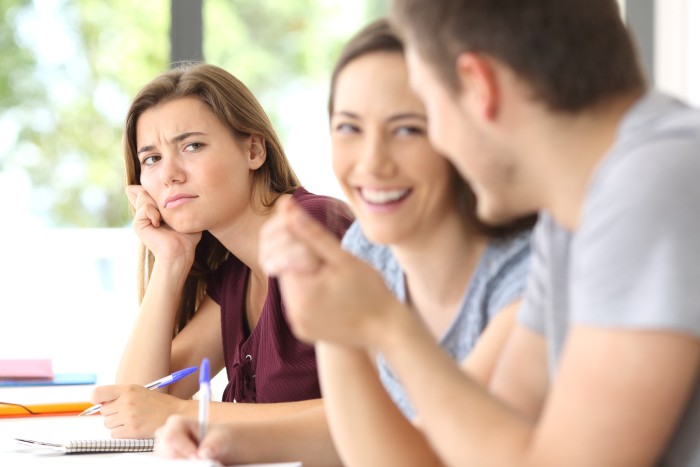 Of all the emotions humans display, jealousy is one of the most common and disturbing, it tends to bring out the worst in us. It is a historical problem, recorded from biblical times, and certainly experienced even before that and it is not limited to humans but affects animals as well.

Jealousy is a complex emotion that encompasses feelings ranging from fear of abandonment to anger and humiliation , affects both men and women, and is usually triggered when a person perceives a threat to a valuable relationship from a third party. The threat can be real or imagined, not limited to romantic relationships, it can arise between siblings who compete for the attention of parents, between co-workers or in friends.

Jealousy is distinguished from envy, since it always involves a third party seen as a rival of affection, and envy occurs between two people and is best summarized as “I want what you have.” Although jealousy is a painful emotional experience, evolutionary psychologists consider that it is not an emotion that should be repressed, but rather that it should be heard, as a signal, a wake-up call that a valuable relationship is in danger and that measures must be taken to recover it, the affection of the partner or friend. As a result, they are seen as a necessary emotion, because it preserves social ties and motivates people to engage in behaviors that maintain important relationships.

Although valuable as a signal to improve important relationships, jealousy has the potential to fuel harmful behaviors, it can force someone to obsessively monitor communication, relationships and a partner’s whereabouts, try to diminish trust or even stimulate violent behavior.

As a natural and universal emotion, although it seems like a taboo topic to discuss, acknowledging its presence can guide us in strengthening our relationships, admit that you feel jealous, and explore the underlying emotions, especially the fear of losing someone you love. You can avoid angry arguments and pave the way for a productive conversation about what might be missing in the relationship and how to repair the bond.

When is jealousy an abnormal emotion?

As stated above, all emotions are normal and jealousy is a normal emotion. Imagine that a woman has just discovered that her husband decided to leave her for another woman, naturally she may feel jealous of the other woman. In this case, the jealousy she experiences is part of the grieving process for her, her anger and jealousy are directed at the object of her husband’s attentions.

Or, for example, many teenage girls experience intense emotions in their friends, so that if a friend decides to spend more time with another friend, they may experience rejection, loss, and jealousy. Unfortunately, if they don’t have help developing methods to solve this problem, they are likely to permanently destroy the friendship due to resentment. However, this normal jealousy is an important experience in learning to develop emotionally mature relationships.

Most adolescents finally discover that the situation is not a true rejection and that they have not lost the friendship, they learn that another person may have room for more than one close friendship, some people do not learn this lesson and will continue to develop emotionally immature relationships until Adulthood.

As you can see from these examples, the common characteristic of normal jealousy is that it diminishes in intensity over time and lasts for a short time, which is the case with most normal emotions. Now, certainly, the duration will vary depending on the circumstances, but eventually the person resolves the emotion and psychologically advances, with irrational jealousy, the individual may remain trapped in the emotional experience for an indeterminate time. In fact, without specific efforts to change, it may never change.

It is important to distinguish the behaviors that trigger jealousy from the real causes of it.

It also goes beyond intimate relationships and in other areas such as a career, when other people are more successful than you or achieve something you want, it can provoke a reaction of envy.

To understand the real causes of jealousy, you need to examine the underlying negative thought patterns that cause inflamed feelings at certain times.

At the root of jealousy is insecurity, it is the most important of all possible causes. Insecurity is when someone is not comfortable in their own skin and because they do not accept themselves, they cannot understand how other people do it.

Given that feeling, he cannot understand why his girlfriend or wife would want to be with them and therefore perceives that she is constantly planning a way to leave him, any interaction with another man sees him as a threat. Therefore, he reacts jealously when she is in the company of other men as a subconscious way to protect the relationship, he thinks that he can prevent her from inevitably leaving him alone if it prevents her from talking to another man.

It is a chain reaction that leads to jealousy and insecurity is one of the main links in the chain.

The most common characteristic of irrational jealousy is fear of loss, this loss can take many forms, but generally falls into the categories of loss of power, loss of self – esteem, or loss of sense of self.

The loss of power can be a person who perceives that their rival has more financial influence or perhaps they saw their place in the records as a measure of self-esteem, which is another type of loss that people are afraid of and finally, the third type of loss is the sense of self. An example of this may be a man who sees himself as the provider of his family and is afraid of losing his wife and family.

People who consider themselves inadequate in comparison to another person or some personal standard are more likely to experience jealousy or envy.

Although none of us enjoy unpleasant feelings, many people with irrational jealousy particularly fear rejection or betrayal and go to extreme measures to try to avoid these feelings. Unfortunately for them, their jealous behaviors can often create what they are trying to avoid.

Fear or sensitization to feelings can arise from previous experiences, such as rejection in childhood or a previous partner who betrayed them.

In a small subset of people with jealousy problems, the cause may be based on delusions. As such, it indicates that the individual may have a serious mental illness, such as paranoid schizophrenia .

A primary way of determining the difference between irrational jealousy and paranoia is that the delusional person firmly believes in the reality of that belief, whereas an irrational jealous individual is more likely to say, “I know I am not being reasonable and It is creating problems, but I can’t help it, it’s how I feel.

In another subset of people, the cause may be obsessive beliefs based on obsessive compulsive disorder . In these individuals, the above causes of jealousy, such as fear of loss, insufficiency, and fear of feelings may be present, but they are shrouded in a layer of obsessions.

These individuals are still connected to reality, but they may have what is known as “overvalued ideation,” which means that they may have greater difficulty recognizing the irrationality of their jealous ideas.

To some extent, possessiveness and protection are a good thing, after all, if you are in a committed relationship, then your woman somehow belongs to you and vice versa. You do not have it, but if you have an exclusive relationship, then there is a certain expectation, it is natural to feel a little protective and the woman likes to know that her man cares, in this case, this cause of jealousy is nothing about to worry.

However, this can be taken too far and is the downfall of many jealous men and women too, they only belong to each other by consent.

Some anthropologists argue that in tribal societies where monogamy was absent, jealousy was also absent, the argument being that since no one had any exclusive right to have sex with another person, there was no possessiveness and therefore no there was reason for jealousy.

It is interesting to note that, at the same time, it must be tempered by the fact that we live in a society in which monogamy is the norm and exclusive rights to sex are expected. In this case, a small level of possessiveness is normal, but when the line is crossed, it can easily spiral out of control.

What are the behavior problems that occur from a jealous person?

1) Violence:   The behavior of greatest concern is the potential for violence. In general, it has been understood that much of violence against women is due to jealousy.

Jealousy can create aggression It has also been shown that aggression depended on a decrease in self-esteem that caused an increase in feelings.

2) Stalking: The problem of harassment related to the subject of violence is an attempt to possess someone, either by trying to convince the other of their devotion or through more direct control methods, the individual is likely to experience a pattern of Anxious attachment with feelings of anger and jealousy.

3) Retribution: Another form of aggression against someone is retribution and this does not have to be direct violence, but can be a more subtle passive-aggressive behavior, such as the example of gossip. In fact, these days with retribution from social media sites has become too easy because people can post hurtful comments about others that may have remained more private in previous decades.

Retribution makes situations escalate instead of being resolved, imagine a situation where a husband is unreasonably jealous of his wife, has her Facebook page password, and posts negative comments on her behalf to his male friends.

4) Obsessively talking or questioning: A very common behavior associated with jealousy is talking about the object of jealousy or excessively questioning someone to determine if their irrational beliefs are correct. The problem with this questioning is that there is no way to prove that something did not happen, therefore it just continues because the person never calms down.

5) Distrust: Another consequence of jealousy is distrust, which is an unpleasant state and is not conducive to the development of healthy relationships.

The steps to permanently end jealousy reactions are:

There are a number of elements that create the dynamic of jealousy. As such, effective solutions will have to address multiple elements of beliefs, points of view, emotions, and personal willpower, if you lose one or more of these elements, it will leave the door open for those destructive emotions and behaviors to return.

By practicing some simple exercises, you can get away from the story that your mind projects and refrain from the emotional reaction, if you really have the desire to change your emotions and behavior, you can do it, it only takes the willingness to learn effective skills. You will find effective exercises and practices to overcome the emotional reaction of jealousy.

Read the related article: How to control jealousy? – 12 ways to get it.