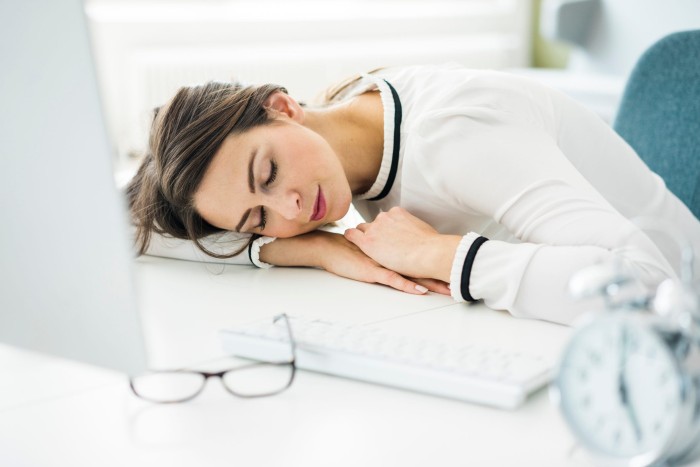 Most of us go through our daily lives in one of two states of consciousness: sleep and wakefulness, with little overlap between the two. We may periodically be tired or exhausted during the day and need a little nap to refresh ourselves. Now try to imagine what it would be like to live in a situation where you almost never feel wide awake and almost never feel completely asleep, existing in a perpetual state where your life always feels trapped between the two of you, and without warning it can happen suddenly. from one to another. For those who suffer from narcolepsy of the disorder sleep , this is everyday life.

It is a long-term neurological disorder that involves a decreased ability to regulate sleep-wake cycles. Symptoms include periods of excessive sleepiness during the day that generally last from seconds to minutes and can occur at any time. About 70% of those affected also experience episodes of sudden loss of muscle strength, known as cataplexy or cataplexy , these experiences can be triggered by strong emotions . Less frequently, there may be an inability to move or vivid hallucinations while sleeping or waking up, people with narcolepsy tend to sleep about the same number of hours per day as people without, but the quality of sleep tends to be worse .

It occurs equally in men and women and is believed to affect about 1 in 2,000 people, symptoms appear in childhood or adolescence, but many people have it for years before obtaining a proper diagnosis.

People with narcolepsy feel very sleepy during the day and may fall asleep involuntarily during normal activities, the normal line between awake and asleep is blurred, so sleep characteristics can occur while a person is awake. For example, cataplexy is REM sleep muscle paralysis that occurs during waking hours, causes sudden loss of muscle tone leading to a loose jaw, or weakness of the arms, legs, or trunk, and they may experience hallucinations and paralysis similar to those of dreams while sleeping or waking up, and also disturb night sleep and nightmares .

What are the signs and symptoms of narcolepsy?

Other signs and symptoms include:

Disturbed nighttime sleep with frequent awakenings and increased body movements may develop after the onset of primary symptoms. This additional symptom, along with excessive daytime sleepiness and REM-related abnormalities.

Automatic behavior can occur in 60% to 80% of narcolepsy patients, occurs when patients carry out certain actions without awareness, with unusual use of words (noise words, slurred speech), and occurs while the patient fluctuates between sleep and wakefulness.

Here are the types of narcolepsy:

In addition to the other symptoms of narcolepsy, people who have it with cataplexy experience sudden muscle weakness and lose control of the muscles of the face, arms, legs or torso, this causes the person to insult words, have a loose jaw, collapses or collapses and cannot move. During cataplexy, the person is awake, an episode can last a few seconds or up to a minute or two, and is often triggered by a strong emotion, such as laughter.

A person with narcolepsy without cataplexy has all the symptoms of narcolepsy (extreme drowsiness, sleep attacks, hallucinations such as dreams and paralysis while sleeping or waking up, and disturbed nighttime sleep), but no episodes of sudden muscle weakness triggered by emotions powerful. This type may be less serious than the previous one.

The exact cause is unknown, however it is believed to be the result of a genetic predisposition and abnormal neurotransmitter function and sensitivity (hypocretin, also known as orexin).

Understanding narcolepsy comes primarily from research involving narcoleptic dogs (eg, lab-raised Dobermans and Labradors), in these animal models the disorder is transmitted in an autosomal recessive manner and is characterized primarily by cataplexy. A small percentage of human cases are inherited and, unlike the canine form, it is transmitted in an autosomal dominant fashion.

The neurotransmitter hypocretin was identified in recent years and is strongly associated with narcolepsy in dogs with a genetic predisposition, hypocretin levels in human subjects with narcolepsy have been found to be undetectable or low in several recent studies.

Hypocretin appears to modulate activity in the hypothalamus (the part of the brain associated with sleep), a deficiency of it can lead to sleep attacks. The drug modafinil (Provigil) is helpful in treatment and is believed to activate nerve cells that contain hypocretin.

How is narcolepsy diagnosed?

The Narcolepsy Center at Stanford University School of Medicine reports that one in 2,000 Americans has narcolepsy, if you have excessive daytime sleepiness or one of the other common symptoms, talk to your doctor. Daytime sleepiness is common in many types of sleep disorders , your doctor will ask about your medical history and perform a physical exam, they will look for a history of excessive daytime sleepiness and episodes of sudden loss of muscle tone, it will usually require a sleep study and various other tests to determine the correct diagnosis.

Some common sleep assessments include the following:

The Epworth Sleepiness Scale (ESS) , a simple questionnaire, asks how likely you are to sleep under different circumstances.

ActiGraph or other home monitoring systems can keep track of how and when to fall asleep, this device is worn like a wristwatch and can be used in conjunction with a sleep diary.

Polysomnogram tests, which require you to spend the night in a medical facility, will be monitored while you sleep with electrodes attached to the scalp to measure brain activity, heart rate and rhythm, eye movement, muscle movement and movement. breathing. This test can also detect sleep apnea .

A multiple sleep latency test, determines how long it takes you to fall asleep during the day and looks at how quickly you enter REM sleep. This test is done the day after a polysomnogram, you will need to take four to five naps throughout the day, every two hours apart.

A spinal tap or lumbar puncture is used to collect cerebrospinal fluid to measure hypocretin levels. Hypocretin is expected to be low in people with narcolepsy, for this test your doctor will insert a fine needle between two lumbar vertebrae.

Narcolepsy is misdiagnosed at first, it can be mistaken for a psychological condition, sleep apnea , restless leg syndrome, or another condition.

Questions a medical provider can ask to obtain a sleep history include:

Normal sleep occurs in five stages and in cycles, as the sleep cycle begins, we go from light sleep to deep sleep, then to REM sleep, when sleep and muscle paralysis occurs. It takes between 70 and 90 minutes to reach the first cycle of REM sleep, since the longer we stay asleep, the more time we spend in REM, and the less time we spend in deep sleep. Scientists believe that adequate REM sleep is necessary for our survival.

People with narcolepsy can suddenly fall asleep, lose muscle tone and start dreaming, this can happen no matter what they are doing or what time of day it is. When this happens, your REM sleep occurs inappropriately and spontaneously, sleep symptoms can all occur at once.

There is no cure for this problem, but medication can help control symptoms, stimulants can treat drowsiness, antidepressants can treat symptoms of cataplexy and abnormal REM sleep.

Anticataplegic medication is the general name given to those used to treat cataplexy, these can also be used for other REM-related symptoms, such as hypnagogic hallucinations and sleep paralysis. The tricyclic antidepressants (AT) , used in lower doses than antidepressant doses, are often effective in controlling cataplexy, and acting on neurotransmitter systems to produce suppression of REM sleep and, consequently, improve cataplexy symptoms.

In some cases, side effects may limit use, although they may be temporary and the most common are called ‘anticholinergic side effects’, including dry mouth, dry eyes, blurred vision, urinary retention, constipation, impotence, increased blood pressure. appetite, drowsiness, nervousness, confusion, restlessness, and headache. Some of the ATs can increase periodic limb movements during sleep, which could further disrupt already disturbed nighttime sleep in narcoleptic patients, stopping abruptly could lead to significant worsening and other REM-related symptoms.

This “rebound phenomenon” can appear within 72 hours after discontinuation of the medication and peak in approximately 10 days after withdrawal.

The selective inhibitors of serotonin reuptake (SSRI) are also useful in the treatment in doses comparable to those used to treat depression. The most widely used are fluoxetine (Prozac), paroxetine (Paxil), sertraline (Zoloft), citalopram (Celexa) and venlafaxine (Effexor). They may not be as effective as ATs, but they have fewer side effects, including dizziness, lightheadedness, nausea, and mild tremor. In rare cases, mild constipation or diarrhea may occur.

The sodium oxybate , also known as gamma-hydroxybutyrate is approved by the FDA to treat cataplexy and excessive daytime sleepiness, this medication is administered in two doses; the first is given before bedtime and the second four hours later, unifies and improves the disturbed nocturnal sleep characteristic of narcolepsy. Sodium oxybate is not related to drugs known to induce sleep (hypnotic) and is not used for insomnia , it can cause drowsiness and should only be taken at night.

Tips for treating narcolepsy at home

Here are some steps you can take to make life with narcolepsy easier and safer:

Keep a consistent sleep schedule. Sleep and wake up at the same time every day, even on weekends.

Avoid caffeine and alcoholic beverages 2-3 hours before bedtime, as these substances can make symptoms worse.

Try a relaxation routine just before bed. A relaxing bath or reading a good book before bed can help promote a better night’s sleep.

Talk to others about your condition. Having the love and support of those close to you can go a long way in treatment. Additionally, your co-workers, employers, and teachers must also know your condition to help meet your needs. Support groups can also be helpful in connecting with other people with the same condition.

Eat light foods during the day.

Keep a healthy weight. Researchers have found an association between narcolepsy and being overweight.

Take care of yourself. Having a condition where staying awake is difficult can be extremely dangerous – even during everyday activities, like walking down stairs or grilling on a barbecue, it can quickly become life-threatening if a sleep attack occurs. , driving can be one of the most dangerous activities for those with untreated narcolepsy, since those with the disorder are 10 times more likely to have driving accidents than those without it.

Work with your doctor to establish a medication schedule that matches your driving schedule and if at any point you begin to feel excessively drowsy, stop what you are doing and take a nap (if possible) or take a break to exercise.