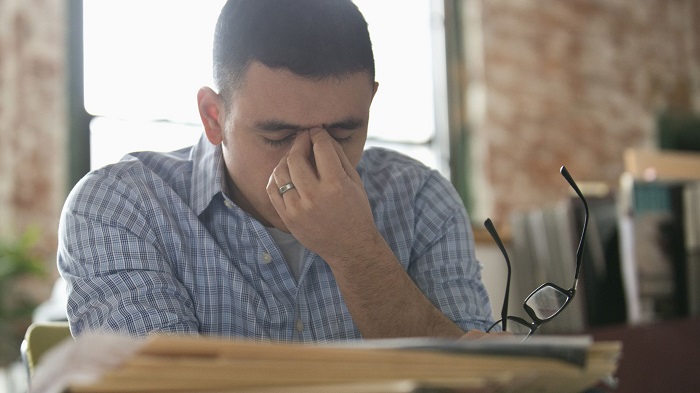 The term psychosomatic disorder is used primarily to refer to a physical illness that is believed to be caused or worsened by mental factors and can also refer to when cognitive factors cause physical symptoms, but there is no physical illness. For example, chest pain can be caused by stress, and no physical disease can be found.

It is believed that some physical illnesses tend to be worsened by mental factors such as stress and anxiety. At any given time, a person’s mental state can affect the severity of a physical illness.

Psychosomatic means mind (psyche) and body (soma), so a psychosomatic disorder is a disease that involves both the mind and the body. Most illnesses are psychosomatic because they have both mental and physical components.

There are three general categories of psychosomatic illness.

First, a person has mental and physical illnesses, the symptoms and management of which complicate each other.

The second category involves a person experiencing mental problems due to medical conditions and treatment. These patients feel depressed because they have cancer and are taking medicine.

The third type is called somatoform disorder. A person with a mental illness experiences one or more physical symptoms, even if they do not have any associated medical conditions. The somatoform disease is classified as follows:

Hypochondria:  This is a condition where the person believes that a minor physical symptom is a severe illness. For example, to conclude the problem of temporary flatulence in colon cancer.

Conversion disorder: A person who does not have any medical illness experiences neurological symptoms, such as seizures, that affect movement and the senses.

Somatization disorder: It is when a person experiences frequent headaches and has diarrhea, which has nothing to do with a severe medical condition.

Body dysmorphic disorder: When a person is stressed by the appearance of their body, such as wrinkles and obesity. Here the person is severely affected by anorexia.

Pain disorder:  When a person feels severe pain in any part of the body, lasting from six months to a year, without any physical cause. For example, migraines, tension headaches, back pain, etc.

What diseases are psychosomatic?

There is a mental aspect to every physical illness; how we react to disease and how we deal with it varies significantly from person to person. For example, the psoriasis rash may not bother some people much. However, a rash covering the same body parts as another person can make you feel depressed and sicker.

There can be physical effects of mental illness; for example, with some mental illnesses, you may not eat or take good care of yourself, which can cause physical problems.

Some physical illnesses are prone to worsening due to mental factors such as stress and anxiety. For example, these include psoriasis, eczema, stomach ulcers, high blood pressure, and heart disease. It is believed that the actual physical part of the disease (the extent of a rash, the level of blood pressure, etc.) can be affected by mental factors; this is difficult to prove as many people with these and other physical illnesses. They say that your current state of mind can affect you even more at any given time.

If a person has a common medical condition, such as essential hypertension, psychological factors such as anxiety and stress will influence that condition in one of the following ways:

Time to stress alteration:  Stress will alter the period used to develop, worsen, or recover the general medical condition. For example, when a person is angry, it prolongs the duration of high blood pressure.

Stress Intrusion –  Psychological factors can interfere with the treatment provided for the general medical condition and create problems.

Generation of risk factors:  The stress component will generate many other risk factors associated with health problems such as diabetes, headache, etc.

Risk factors for the psychosomatic disorder

Psychological factors can alter a medical condition to some degree.

Cancer:  Many causative factors are responsible for cancer development in people. Studies have shown that psychological stress directly affects the tumor’s ability to grow and spread, thus worsening the size of cancer.

Some medical conditions arise due to mental stress, such as:

Hypertension:  Some psychological triggers, such as negative emotional state, frequent adverse stress, and social factors, such as economic status and life events, are indirectly related to blood pressure levels.

Arteriosclerosis associated with heart disease:  Studies have concluded that the development of coronary heart disease is correlated with several risk factors in which depression, anxiety, and stress are also significant causes.

Respiratory problems:  In addition to various etiological influences, emotional stress is a significant trigger associated with the induction of bronchial asthma.

How can the mind affect physical diseases?

It is well known that the mind can cause physical symptoms. For example, when we are afraid or anxious, we can develop:

These physical symptoms are due to the increased activity of nerve impulses sent from the brain to various parts of the body and the release of adrenaline (epinephrine) into the bloodstream when we are anxious.

However, the exact way the mind can cause specific other symptoms is unclear. How the reason can affect actual physical illnesses (rashes, blood pressure, etc.) is also unclear, it may have something to do with nerve impulses going to the body, which we do not fully understand, where there is some evidence that the brain can affect specific cells of the immune system, which is involved in various physical diseases.

What are the treatments for psychosomatic disorders?

Each illness has its treatment options; for physical diseases, treatments such as medication or operations are usually the most important, but therapists will generally treat a person as a whole and consider the mental and social factors involved. They are contributing to illness. Therefore, treatments to relieve stress, anxiety, depression, etc., can help if they are believed to contribute to your physical condition.