Skip to content
PsychoTreat > Psychotherapy > What Is Psychodrama ?: Techniques, Phases, Elements And More 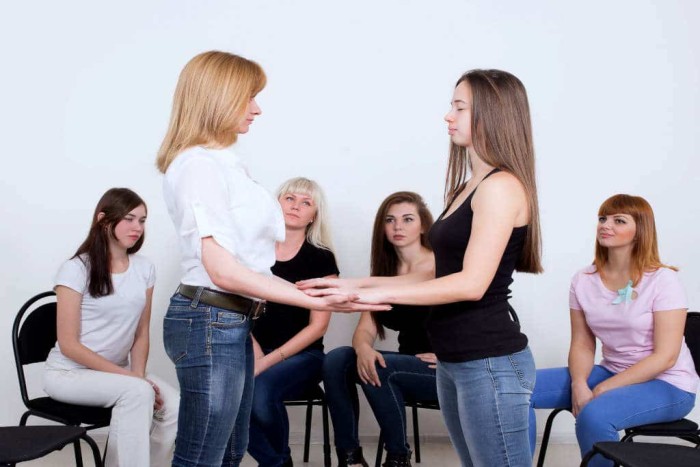 The Psychodrama is an action method, often used as psychotherapy , in which customers use spontaneous dramatization, role plays and dramatic presentations to investigate and learn about their lives. Developed by Jacob L. Moreno, psychodrama includes elements of theater, performed on a stage, or a space that serves as a stage area, where props can be used.

A psychodrama therapy group, under the direction of a licensed psychodramatist, recreates past situations (or internal mental processes) from real life, representing them in the present tense. The participants then have the opportunity to assess their behavior, reflect on how the past incident plays out in the present, and further understand particular situations in their lives.

It offers a creative way for an individual or group to explore and solve personal problems. It can be used in a variety of clinical and community-based settings, and is most often used in a group setting, in which group members act as therapeutic agents for one another in the drama depicted.

It is a role-playing method developed by JL Moreno, who is considered the father of group psychotherapy and his work represents the first attempts to treat people in groups rather than exclusively in a one-on-one setting, as it was. the standard set by Freud during this period.

Psychodrama allows complexes and conflicts to be concentrated by choosing group members to play roles in the protagonist’s life; it allows the protagonist to have a physical “encounter” with the self; to see and experience what you carry within your mind and body, so that it can be made explicit, concrete and can be dealt with in the here and now.

The goal of psychodramatic role-playing games is to resolve through understanding the action rather than speaking alone. Through role play, thought , feeling and behavior emerge simultaneously to allow a more complete view of what is being carried in the psyche to appear.

The “double” acts as an inner voice that puts words into inner thoughts, feelings, and emotions that may be less than conscious. This “duplication” of others helps increase self-awareness and provides the protagonist with a sense of being seen, supported, and understood.

The “reversal of roles” allows the protagonist to really put himself in the place of other people in the role play to see himself from the position of the other and to really experience being “in the shoes” of someone else.

Sessions are conducted as weekly group therapy sessions, typically comprising 8 to 12 members, lasting between 90 minutes and 2 hours. Each psychodrama focuses on an individual’s life situation, with group members assuming roles as needed.

Typically, a session runs in three phases: the warm-up phase, the action phase, and the exchange phase. Through role-based play and drama, the protagonist and other participants develop insight into past problems, current challenges, and future possibilities.

The goal of the warm-up phase is to help establish trust, group cohesion, and a sense of security among members. Without trust, group members may not feel comfortable performing action methods or exploring raised issues or conflicts. One technique often used in warm-up is role-play, where group members take on a certain role to introduce themselves.

Because in psychodrama, group members act roles in the lives of other members, this technique can help provide insight to those in the group. As the members get to know each other, a member may volunteer to act as the lead in the psychodrama, or the main focus.

During this phase, the director changes to a therapist role to facilitate the processing of the scene. Processing the meaning of the feelings and emotions that have come to light is believed to be essential for transformation to occur.

The sharing phase provides time for a group discussion about the events that took place in the action phase. The audience might consider, among other issues, how their thoughts or observations might have an impact on the protagonist’s ways of interacting or relating to others.

The following techniques are most commonly used as part of the action phase:

This technique can be used to create empathy with the protagonist or to challenge, in a constructive and non-aggressive way, some aspect of the scene or the actions of the protagonist.

The protagonist relates the internal thoughts and feelings with the audience, this can be done when speaking with a double or with the encouragement of the director (therapist).

The setting:  The designated area where enactment takes place.

Who can benefit from psychodrama?

The psychodrama approach has proven successful in facilitating the expression of strong emotions and feelings. On the contrary, it has also been shown to be a useful approach for people who work to better contain their emotions.

Because the technique emphasizes the body and action, as well as emotion and thought, it is considered a comprehensive technique and is believed to be effective for a wide range of concerns. People experiencing difficulties with relationships, social and emotional function, trauma or unresolved loss or addiction may find psychodrama a helpful approach.

It can be beneficial for those who are diagnosed with moods, personality disorders, or eating disorders and face identity and / or negative self-image issues, as this technique can provide people in treatment with a safe space and format to communicate the pain and challenges faced.

One study showed that psychodrama is effective in treating school-age girls who have experienced trauma. Girls who participated in the study reported being less anxious, depressed, and withdrawn after participating in a psychodrama group for 20 weeks.