Skip to content
PsychoTreat > Psychotherapy > Psychoanalysis: What it is, History, Theories, Applications and Treatment. 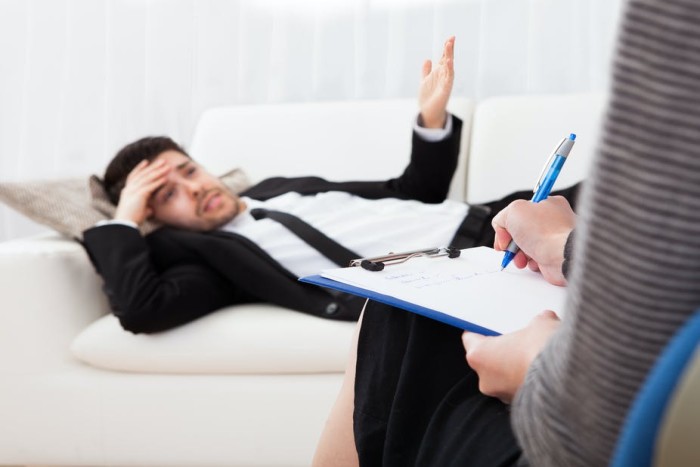 The psychoanalysis , is a very influential method for treating disorders mental, consisting of psychoanalytic theory, which emphasizes unconscious mental processes and sometimes described as “deep psychology”.

1. A method of investigating the mind and especially the unconscious mind .

2. A neurosis therapy inspired by the previous method.

3. A new autonomous discipline based on the knowledge obtained from the application of the research method and clinical experiments.

Therefore, there is nothing confusing than the definition of psychoanalysis. It is a specific technique of investigation of the mind and a therapy inspired by this technique. We would put therapy at the forefront to make it even clearer that psychoanalysis is not speculative at all, that it is linked more to psychotherapy and less to philosophy, art or culture in general.

The science of psychoanalysis that we mention in the third point comes to the light of Freud’s famous study called Totem and Taboo, in which he is launching a social and anthropological analysis based on the knowledge extracted from the application of psychoanalysis to the therapy of neurosis. .

The psychoanalytic movement originated from the clinical observations and formulations of the Austrian psychiatrist Sigmund Freud, who coined the term. During the 1890s, Freud associated with another Viennese, Josef Breuer, in studies of neurotic patients under hypnosis, both of whom observed that, when the sources of the patients’ ideas and impulses came to consciousness during the hypnotic state, the patients showed improvement.

Observing that most of his patients spoke freely without being under hypnosis, Freud developed the technique of free association of ideas, the patient was encouraged to say anything that occurred to him, regardless of its supposed relevance or decorum, noting that patients Sometimes they had difficulty establishing free associations, Freud concluded that certain painful experiences were repressed or retained by consciousness, he noted that in the majority of patients seen during their early practice, the most frequently repressed events were related to disturbing sexual experiences.

Thus, he hypothesized that anxiety was a consequence of the repressed energy associated with sexuality; repressed energy found expression in various symptoms that served as psychological defense mechanisms. Freud and his followers later extended the concept of anxiety to include feelings of fear, guilt, and shame as a consequence of fantasies of aggression and hostility, and of the fear of loneliness caused by separation from a person on whom the patient is dependent.

The predominant psychoanalytic theories can be organized into various theoretical schools, although these differ, most of them emphasizing the influence of the unconscious elements on the conscious, considerable work has also been done to consolidate elements of contradictory theories.

Psychosexual development and the Oedipus complex

One of Freud’s best-known theories was what is known as psychosexual development , where he postulated that, as children, they go through a series of stages centered on erogenous zones. The successful completion of these stages, he argued, led to the development of a healthy personality , but fixation at any stage prevents the realization and therefore the development of an unhealthy and obsessed adult personality. Elements of this theory are still used in modern psychodynamic / psychoanalytic therapy, over time it has been superseded by a much more modern theory.

Oral stage (from birth to 18 months): The child focuses on oral pleasures, such as sucking. Difficulties at this stage could lead to an oral personality in adulthood focused on smoking, drinking alcohol, nail biting, and can be pessimistic, gullible, and overly dependent on others.

Phallic stage (ages 3 to 6 years): During the phallic stage the child’s pleasure is transferred to the genitals and Freud argues that during this stage children develop an unconscious sexual desire for their mothers and fear that because of this their fathers Punish by castration, this became known as the Oedipus complex after the Sophocles tragedy. A fixation on stage could lead to confusion about sexual identity or to engage in sexual deviations.

Genital stage (puberty onwards): This final stage leads the individual to shift his interest to members of the opposite sex.

In his later work, Freud proposed that the human psyche could be divided into three parts: Id, Ego and Superego, he discussed this model in the 1920 essay “Beyond the pleasure principle” and elaborated it in 1923.

The ID or it:  According to Freud, identification is the completely unconscious, impulsive and demanding part of the psyche that, as a child, allows us to satisfy our basic needs. This part of the psyche operates on what Freud called the pleasure principle and is about making all our needs and desires come true regardless of reality. Identification seeks immediate gratification.

The Ego or I:  It is based on the principle of reality, it understands that the Id cannot always have what it wants because sometimes that can cause us problems in the future, as such, the ego is the guardian of identification, which It allows you sometimes to have what you want, but always making sure that the reality of the situation is taken into account.

As such, it is Ego’s role to find a balance between the demanding id, versus the self-critical superego. Freud claimed that in healthy individuals, the ego is doing a good job of balancing the needs of these two parts of the psyche, however, in those where one of the other parts is dominant, individual struggles and problems develop in the personality. The balancing act between these two aspects of the psyche can sometimes be difficult for the Ego, which is why it employs a variety of different tools to help mediate, known as Defense Mechanisms.

Psychoanalysis describes different defense mechanisms against the development of anxiety related to the libidinal demands of the unconscious. These defenses describe, on the one hand, the type of mental disorder and, on the other hand, they can be associated with the structuring phases of the psychic apparatus.

Thus, there are defenses generated by the psychic apparatus before the structuring of the ego, such as repression, and others that result from practically any type of mental operation initiated by the ego, such as the logical explanation of some events.

It can be explained through the refusal to accept something that arose or is happening in the mind. Therefore, victims of some traumatic family events may deny these traumas. The well-known case of the wife beaten by the husband who refuses to acknowledge that she is beaten. In this case, we are not talking about a defense against anxiety, but about breaking through the narcissistic ego.

It is an autonomous mechanism that acts to prevent representatives connected with unconscious demands from accessing consciousness and taking a course of action. Sometimes we consciously act in this direction and call this mechanism suppression or condemnation, Freud writes precisely that in psychoanalytic treatment repression must be replaced by conviction, that is, with processing on a conscious level of conflict with unconscious demands.

It is a frequent mechanism especially known for the dream formation process, it means that an effect is associated with other objects or events that are in a contiguous relationship with the initials that triggered it. In general, we very easily discover displacement in everyday life when someone fights with their children because they cannot cope with a hostile boss or displaced hostility against a neighbor while the real cause was an unpopular measure of the government or corruption in the administration. public, etc.

Through sublimation, an unacceptable impulse is transformed into a socially acceptable one. In sports, for example, we find the sublimation of aggressive demand in competition or pageant.

It refers to the case when we attribute our own units or characteristics of character to external objects, it is characterized by an extortionate development of criticism against the prejudices and defects of other people. Projection comes along with denial.

It refers to going back to the previous phases of sexual development and objects. For example, to the oral phase, where the person may develop the feeling of always being hungry or refusing to eat ( anorexia ).

Our conscious mind, however, according to Freud, represents a small amount of our personality, as we are only aware of the small tip of the iceberg of what is really going on in our minds. Freud also added a third level to our psyche known as the preconscious or subconscious mind, this part of the mind is the one that, although we are not aware of what it contains at all times, we can retrieve information and memories from it if requested. . This is one of the most important Freudian contributions and is still widely used in psychotherapy today.

Psychoanalysis (along with Rogerian humanistic counseling) is an example of comprehensive therapy that aims to help clients achieve a major change in their entire outlook on life.

This is based on the assumption that the current maladjustment perspective is tied to deep-seated personality factors. Global therapies are in contrast to approaches that focus primarily on symptom reduction, such as cognitive and behavioral approaches, so-called problem-based therapies.

Like phobias , panic attacks, obsessive-compulsive disorders, and post- traumatic stress disorder are obvious areas in which psychoanalysis can be assumed to work. The goal is to help the client accept their own identifying impulses or recognize the source of their current anxiety in childhood relationships that are relived in adulthood.

It can be treated with a psychoanalytic approach to some extent. Psychoanalysts relate depression to the loss each child experiences upon realizing our separation from our parents in early childhood, the inability to accept this can leave the person prone to depression or depressive episodes in later life.

Treatment involves encouraging the client to recall that early experience and untangling the fixations that have built up around them. Special care is taken with transference when working with depressed clients due to their overwhelming need to depend on others. The goal is for clients to become less dependent and develop a more functional way of understanding and accepting loss / rejection / change in their lives.

How does psychoanalytic treatment work?

It is based on the idea that people are often motivated by unrecognized wishes and desires that originate in the unconscious.

These can be identified through the relationship between the patient and the analyst. By listening to the stories, fantasies and dreams of patients, as well as discerning how patients interact with others, psychoanalysts offer a unique perspective that friends and family might be unable to see, also listening to the ways in which these patterns occur. What is outside the patient’s consciousness is called “transference” and outside the analyst’s consciousness is called “countertransference.”

Talking to a trained psychoanalyst helps to identify underlying problem patterns and behaviors, by analyzing transference and countertransference, analyst and patient can discover pathways to the emotional freedom needed to make substantive and lasting changes and heal past trauma.

Normally, psychoanalysis implies that the patient attends several times a week and communicates in the most open and free way. While the more frequent sessions deepen and intensify the treatment, the frequency of the sessions is resolved between the patient and the analyst.

The sofa, which has become so intertwined with the public image of psychoanalysis, is no longer necessary. While many analysts and patients find the couch beneficial and helps patients relax and be more open, others feel that a face-to-face arrangement works best for them.