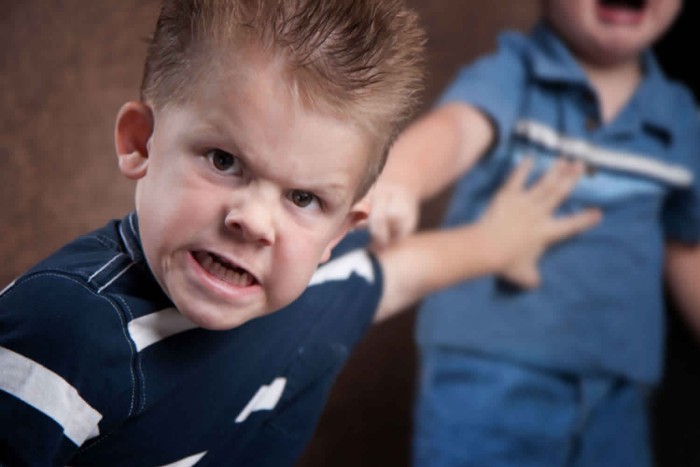 All children will have difficulty controlling their behavior at some point in their childhood, but as they grow, they learn to build friendships and better understand how their behaviors affect others. If a child seems to lack understanding of negative behavior and apparently does not care about the feelings of others, this could indicate a problem and that is that they could be suffering from conduct disorder .

What is conduct disorder?

It is a conduct disorder that occurs when children engage in antisocial behaviors, have trouble following rules, and struggle to show empathy towards others. They can also threaten the safety of others or themselves, it usually appears in children under 16 years of age, but it can also be diagnosed in adults.

It is not uncommon for children and adolescents to have behavior-related problems at some point in their development. However, behavior is considered a conduct disorder when it is long-lasting and when it violates the rights of others, goes against accepted norms of behavior, and disrupts the daily life of the child or family.

What are the symptoms of conduct disorder?

If your child has mild symptoms, it means that he shows few or no behavior problems in excess of what is required to make the diagnosis. Behavioral problems cause relatively minor harm to others, common problems include lying, missing classes, and staying out of the house after dark without parental permission.

Your child has severe symptoms if he has behavioral problems in excess of those required to make the diagnosis, these problems cause considerable harm to others, which can include rape, use of a weapon or burglary.

The behavioral disturbance causes clinically significant impairment in social, academic, or occupational functioning. If the individual is 18 years of age or older, the criteria for antisocial personality disorder are not met .

Two conduct disorder subtypes are provided based on age of onset (ie, type of childhood onset and type of adolescent onset). The subtypes differ in the characteristic nature of the behavioral problems that present themselves, the course and prognosis of development, and the gender ratio.

Type of onset in childhood.

This subtype is defined by the onset of this disorder before the age of 10.

Individuals with the childhood-onset type are generally male, frequently show physical aggression toward others, have disturbed peer relationships, may have had oppositional defiant disorder during early childhood, and generally have symptoms that meet all criteria for conduct disorder before puberty.

These individuals are more likely to have persistent conduct disorder and to develop antisocial personality disorder in adults than those with an adolescent-onset type.

This subtype is defined by the absence of characteristic criteria for conduct disorder before 10 years of age.

Compared with those with the childhood-onset type, these individuals are less likely to display aggressive behaviors and tend to have more normative relationships with their peers (although they often exhibit behavior problems in the company of others), these individuals are less prone to having persistent conduct disorder or developing antisocial personality disorder in adults.

Although the cause of conduct disorder is complicated by an intricate interplay of biological and environmental factors, identifying the underlying mechanisms is crucial for obtaining an accurate assessment and applying effective treatment, these mechanisms are the fundamental elements on which to build. develop evidence-based treatments.

Despite the complexities, several domains have been implicated in the development of conduct disorder, including cognitive variables, neurological factors, intra-individual factors, family and peer influences, and broader contextual factors. , these factors can also vary depending on the age of onset, with different variables related to early onset (for example, the basis of neurodevelopment) and to onset in adolescence (for example, social and peer relationships ).

The development of conduct disorder is said to be the result of a combination of factors, including genetic, physical, and environmental components. Some examples of these factors may include:

Personality traits are commonly inherited from family members, so components of conduct disorder can have genetic influences.

Deficiencies in the frontal lobe of the brain have been linked to the development of conduct disorder, because the frontal lobe is responsible for regulating a person’s emotions . It is also said to be the “home” of the personality, so if there is some kind of impairment or imbalance in that part of the brain, a person is more likely to be susceptible to developing symptoms of the disorder.

It is argued that parental behavior is an important component in determining whether or not a child will develop conduct disorder symptoms. Children who are raised without any form of appropriate discipline or whose parents tend to be absent more than they are present can experience a resulting impact on the behaviors they exhibit.

A child’s atypical interaction with a mother suffering from postpartum depression can also have long-lasting effects on the child’s future behaviors.

Some experts believe that conduct disorders may reflect problems with moral conscience (in particular, lack of guilt and remorse) and deficits in cognitive processing.

Low socioeconomic status and the fact of not being accepted by their peers seem to be risk factors for the development of conduct disorders.

What is the diagnosis of conduct disorder?

Children, adolescents and adults can be diagnosed with conduct disorder if they have several of the signs mentioned above. The signs must have been present for at least a year to receive a diagnosis.

When diagnosing children or adolescents, a psychiatrist may want to observe the child’s behavior and also talk to their parents and teachers.

When a psychiatrist or mental health professional evaluates a person for conduct disorder, they will also want to rule out any other diagnoses or evaluations for co-occurring mental health disorders. Because many of the signs are similar to antisocial personality disorder, an adult cannot be diagnosed with both conditions.

There is not much difference between the two disorders, but conduct disorder is typically diagnosed in children, so if an adult meets the criteria for both, then the diagnosis of antisocial personality disorder would be given instead of conduct disorder. It is really a question of age rather than differences between diagnoses.

However, children and adults who receive a diagnosis may also have concurrent diagnoses, including attention deficit hyperactivity disorder, substance abuse , post-traumatic stress disorder , anxiety disorders , depression, or bipolar disorder, and may also have learning difficulties. .

It can be difficult to distinguish between conduct disorder and autism spectrum disorder , although many of the symptoms may appear similar, there are several key differences between the two diagnoses.

If conduct disorder persists into adulthood, it can become increasingly troublesome. Adults with this disorder may have difficulty maintaining a job or relationships and may become prone to illegal or dangerous behaviors.

Symptoms in an adult can be diagnosed as antisocial personality disorder.

What is the treatment for conduct disorder?

Treatment depends on several factors, such as the child’s age and the severity of the behavior problems. The most common treatment methods include:

Early intervention is the key to obtaining the most effective treatment, so it is important that parents, educators, and clinicians are aware of the signs of conduct disorder in children so that appropriate referrals and interventions can be implemented.

Can conduct disorder be prevented?

The best way to improve the prognosis is to prevent conduct disorder before it becomes so resistant to treatment. It is investigating which early interventions are the most promising, incorporating several components such as child tutoring, classroom intervention, peer training, socio-cognitive skills training, parent training and family problem solving.

Other studies have included early parental or family interventions, school interventions, and community interventions. Again, these include a variety of elements, including parent training such as education on normal child development, problem solving for children, and training in family communication skills. Research is still needed to determine where and when to target specific preventive interventions.

Researchers believe that positive parenting, as well as providing a safe and supportive environment for a child, can reduce the risk of conduct disorder. Reducing risk factors that can increase the possibility, such as poverty and abuse, is likely to ensure the best outcome for the child.

Early diagnosis and treatment are vital to prevent further mental and behavioral health problems, with the right support, children and adolescents can begin to interact more positively with their peers and adults and learn to correct harmful behaviors.

What is the long-term outlook for children with conduct disorder?

It depends on the severity and frequency of your child’s emotional and behavioral problems. Children who continually display extremely aggressive, deceitful, or destructive behavior tend to have a poorer outlook.

The outlook also worsens if other mental illnesses are present, however, getting a timely diagnosis and receiving comprehensive treatment can improve significantly. Once treatment for conduct disorder and any other underlying conditions is received, your child has a much greater chance of significant improvement and hope for a more successful future.

Without treatment, they are likely to have ongoing problems, they may not be able to adjust to the demands of adulthood, which can cause problems with relationships and keeping a job, they are also at increased risk for substance abuse and problems with the police.

Could oppositional defiant disorder be a precursor to conduct disorder?

Some children with oppositional defiant disorder develop conduct disorder. It is a behavior disorder that involves an angry or irritable mood pattern, argumentation, defiance, and revenge.

Without effective treatment, it is believed that it can progress to conduct disorder as the child ages. Children with this disorder may be more likely to develop antisocial personality disorder later in life.