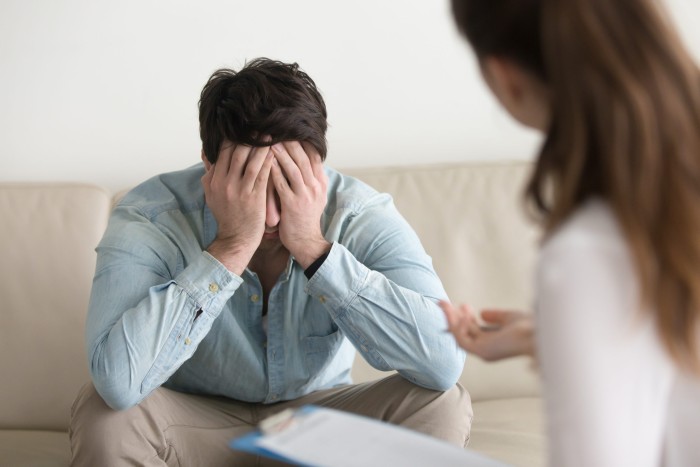 It is a disorder in which a person experiences blindness, paralysis, or other symptoms that affect the nervous system and that cannot be explained solely by illness or physical injury. Symptoms usually begin suddenly after a period of emotional or physical distress or psychological conflict.

Symptoms can be temporary or they can persist for a long period of time. Temporary symptoms are common, but the prevalence of the condition is unknown.

Conversion disorder is two to three times more common in women than in men, the rate of persistent new diagnoses is approximately two to five cases per 100,000 each year.

Symptoms vary from person to person and in severity. They can occur once or repeat when the stressor is removed. They may include:

The symptoms of conversion disorder usually start abruptly at the time of a stressful or traumatic event, most of the time the symptoms also stop abruptly. Some people may experience seizures or hallucinations.

Amnesia is the temporary or permanent loss of part or all of your memory , when this is due to extreme psychosocial stress , it is called dissociative or psychogenic amnesia. This stress is generally associated with catastrophic events.

This is often the result of a particular event, the illness makes the afflicted unable to recall the details of a generally traumatic event, such as an incestual rape, this is undoubtedly the most common type of amnesia.

As the name implies, this is similar to localized amnesia, except that the retained memory is very selective. Often, a person can remember certain general circumstances of the traumatic situation, but not the specific parts that do so.

These less common forms of amnesia are defined as when the patient forgets the details of an entire life, or as in the case of continuous amnesia, cannot remember the details before a certain point in time, including the present.

Recognized as a separate clinical syndrome, a leak is simply the addition to the generalized amnesia of an escape from your family, problem, or location. In very rare cases, the person can create a completely new life.

It is defined as the occurrence of two or more personalities within the same individual, each of which, during some time in the person’s life, can take control, this is not a mentally healthy thing when the personalities compete for control .

Symptoms are, of course, self-explanatory, but it is important to note that personalities are often very different in nature, often representing extremes of what is contained in a normal person. Sometimes the disease is asymmetric, meaning that what one personality knows, others inherently know.

This is the continuous presence of feelings that the person is not oneself or that they cannot control their own actions, these are common human feelings, they are labeled as a disorder when it is recurrent and affects social and occupational function.

A symptom is a change in the perception that the person has of himself. The disease can cause strange feelings that the limbs are not the correct shape or size, it can also cause a feeling of being outside the body. The person perceives others as mechanics or as if they existed in a dream, the afflicted have a constant preoccupation with going crazy.

What are the causes of conversion disorder?

The exact cause is not well understood, as some researchers believe that conversion disorder is more common after instances of physical or psychological stressors, it is possible that the symptoms of the disorder allow affected individuals to provide a physical outlet to stress in their lives.

In other cases, affected people do not appear to have a stressor that is causing the symptoms and this is where the cause of conversion disorder is unknown.

Research into the cause of conversion disorder has found that brain images of some people with the disorder show increased or reduced blood flow to certain areas of the brain. If the areas of the brain that are responsible for communication with other parts of the body have reduced blood flow, this can cause neurological symptoms associated with conversion disorder, it is possible that these changes in blood flow could be caused by the brain receives information about physical or emotional stressors.

Regardless of the cause of the disorder, it is important to remember that the symptoms are very real, the affected people are not pretending or faking it.

How can a conversion disorder be diagnosed?

Diagnosis is based on a healthcare provider noting symptoms consistent with the disorder, other causes of similar symptoms should be ruled out to avoid misdiagnosis.

It is best for a neurologist and psychiatrist to work together to make the diagnosis, current criteria for the disorder include:

In some cases, people who are diagnosed with conversion disorder are later found to have another neurological disease, so treatment should be based on established recommendations for that disease.

Treatment for conversion disorder usually consists of psychotherapy , physical therapy, and / or medications.

The goal of psychotherapy is to help the individual understand the emotional conflict that underlies their physical symptoms and to resolve this underlying psychological distress. Treatment may include individual or group therapy, hypnosis, biofeedback, and relaxation training.

Physical therapy attempts to maximize physical functioning and prevent any secondary complications that may result from symptoms, such as muscle weakness or stiffness that follow periods of physical inactivity. Conversion disorder can also be treated through the use of psychotropic medications that address underlying psychiatric problems, such as depression and anxiety.

A positive prognosis can be expected when conversion symptoms have a sudden onset, are present for a short period of time, the individual accepts their diagnosis, and there are no additional psychiatric disorders .

Can a conversion disorder be prevented?

The main method of preventing conversion disorder is to find ways to relieve stress and avoid emotional trauma when possible. Some preventive measures may include:

You may not be able to control some of these areas. However, if you work to control the areas that you can, you can better manage those that you cannot, any reduction in stress and emotional trauma can be effective in helping to prevent conversion disorder.