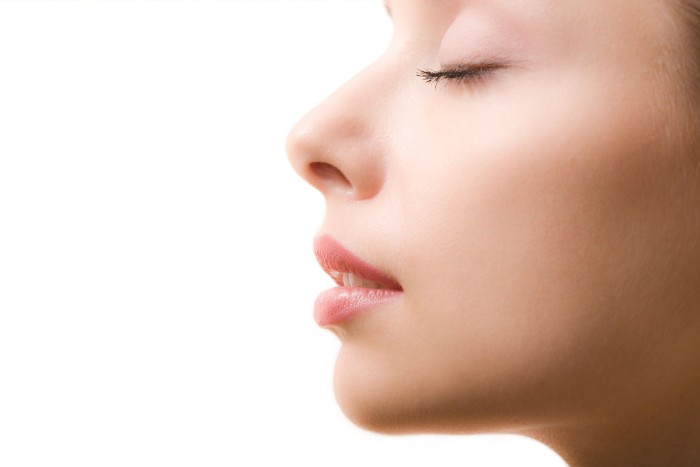 The perception of smell is considered less acute senses, and a number of animals are obviously superior to humans in their olfactory abilities, this difference is probably explained by the large number of neurons olfactory receptor (and receptor molecules of odorant) in the olfactory epithelium in many species and in the relatively larger area of ​​the cortex dedicated to smell.

What is olfactory perception?

It is a process that begins in the nose with the stimulation of olfactory sensory neurons and ends in the higher brain centers that, when activated, make us aware of a smell.

In humans, this awareness is usually confirmed by verbal reports, whereas some type of odor detection or discrimination task is used in animal studies.

In mammals, olfactory stimuli are received and processed by multiple systems (the main olfactory, vomeronasal, and the septal organ system). Activation (particularly by irritants) of the trigeminal, vagal, and glossopharyngeal receptors in the respiratory tract may contribute to the perceptual experience, however, most research has focused on the primary olfactory system, which also appears to be the only system olfactory functional in humans.

Olfaction is a chemoreception that forms the sense of smell, it has many purposes, such as the detection of dangers, pheromones and food. It integrates with other senses to form the sense of taste, it occurs when odorants bind to specific sites on the olfactory receptors located in the nasal cavity. The glomeruli add signals from these receptors and transmit them to the olfactory bulb, where sensory input will begin to interact with the parts of the brain responsible for identifying smell, memory, and emotion . Terrestrial organisms will often have separate smell systems for smell and taste (orthonasal odor and postnasal odor), but aquatic organisms generally have only one system.

How is the olfactory perception process?

The sensation of smell is complex, the perception of smell is influenced by many factors unique to each individual as well as external environmental factors. The basis is the contact between chemical molecules, mainly in the gaseous state, which can be detected by the olfactory epithelium.

A branch of the fifth cranial nerve, the trigeminal nerve, is the vehicle for the perception of irritation in the nose, nasopharynx and oropharynx, as well as the sensation of taste and odor. The trigeminal nerve also contributes to assessing the magnitude of smell perception even without irritation, it is interesting to note that some molecules are also detected by irritation and smell.

Olfactory perception by humans is the result of a stimulus, it includes key information such as the intensity of the smell and its quality. Our ability to collect this information makes smell have a very complex sense, all the biochemical parameters have not yet been fully understood by specialists.

What is the interaction of olfactory perception with other senses?

It is important to bear in mind that when you perceive an odor, it is connected in some way with the following:

Taste perception is an aggregation of auditory sensory information, taste, haptic and smell, the retronasal smell plays the most important role in the taste sensation . During the chewing process, the tongue manipulates food to release odors, these odorants enter the nasal cavity during exhalation. The olfaction of food has the sensation of being in the mouth due to the coactivation of the motor cortex and olfactory epithelium during chewing.

Smell, taste, and trigeminal receptors (also called chemosthesis) contribute to taste. The human tongue can distinguish between only five different qualities of taste, while the nose can distinguish between hundreds of substances, even in minute quantities. It is during exhalation that smell’s contribution to taste occurs, in contrast to that of proper odor that occurs during the inhalation phase of breath. The olfactory system is the only human sense that bypasses the thalamus and connects directly to the forebrain. [3. 4]

What are the disorders that are detected with olfactory perception deficit?

The following are smell disorders are:

It is the inability to smell , it can be partial or complete, although a complete loss of smell is quite rare, it can be temporary or permanent, depending on the cause.

Some people are anostic from a particular odor, this is called “specific anosmia”, although it can sometimes be a symptom of a serious illness, it is not necessarily serious in itself. Still, an intact sense of smell is necessary to fully savor food. Loss of smell can cause you to lose interest in eating, which can lead to weight loss, malnutrition, or even depression.

Things smell different from memory or expectations, it is a neurological disorder that causes an altered sense of smell . The condition can manifest itself in several ways: it can distort odors, which is a secondary condition called parosmia; not initiating any olfactory response, called anosmia; or it produces odors that are not there, called phantosmia, since the oral cavity and the olfactory system are interrelated, some patients with dysosmia may also have problems with their sense of taste.

It is the condition of having a higher than average capacity to smell and perceive odors, this can also translate into greater detection of flavors. Hyperosmia sometimes occurs in a temporary state due to pregnancy or drug use.

Hyperosmia is of particular relevance to those who work in the sensory field as affected individuals have a greater ability to perceive and discriminate between flavors and odors than average consumers. Sensory Analysts should be aware of this condition and may need to screen panelists prior to panel participation.

It is the partial loss of the ability to perceive odors , this condition is related to anosmia, this deterioration can be the result of a head injury, allergies, flu, infections, nasal polyps or other causes. Hyposmia is the most common olfactory disturbance and is sometimes self-healing, but most of the time it remains permanent.

Psychological disorder that causes the patient to imagine that they have a strong body odor , the obsession can be an exaggerated and disproportionate concern with a natural body odor, or it can involve a completely imagined odor, it goes beyond the normal concern with personal hygiene, and it can significantly affect academic and professional functioning, as well as interpersonal relationships.

In extreme cases, people with olfactory reference syndrome may quit work and avoid social situations in an effort to avoid the embarrassment they imagine they will experience when the suspected odor is detected by others.

Also called troposmia, parosmia is the alteration of olfactory function that leads to the inability of the brain to recognize the natural or intrinsic odor of a particular odor. Causes include upper respiratory tract infections, head trauma, temporal lobe epilepsy , and Parkinson’s disease . There is no specific treatment available, but it is known to decrease in severity over time.

It is a phenomenon in which an individual smells something that is not really there , this phantom smell can affect one or both nostrils, and it can be pleasant, neutral or unpleasant. Most cases of phantosmia are unpleasant olfactory hallucinations (cacosmia), with people reporting the smell of burning, or something that is rotten or dirty.

Importance of smell in daily life

It is well established that the sense of smell is important for nutrition, safety and quality of life.