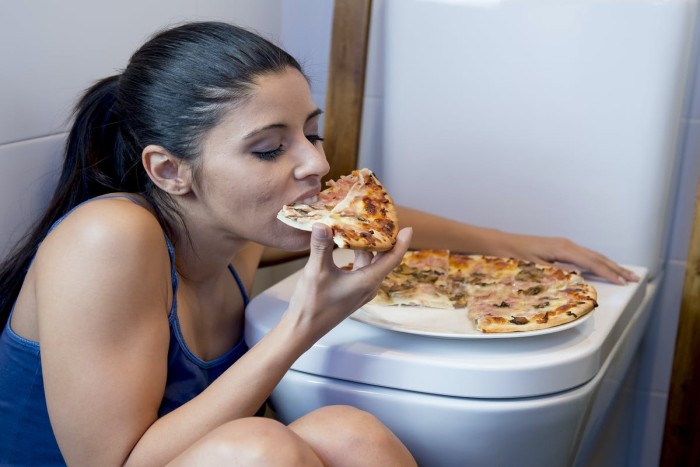 Many of us turn to food when we feel lonely, bored or stressed but if you have bulimia nervosa , overeating is more like a compulsion and then instead of eating sensibly to compensate you punish yourself by vomiting, fasting or exercising to eliminate calories. This vicious cycle of bingeing and purging has consequences on your body and your emotional well-being, but the cycle can be broken with the right help and support, you can develop a healthier relationship with food, overcome your feelings of anxiety , guilt and shame. , and regain control of your life.

What is the nervous bulimia?

It is also known simply as bulimia, it is an eating disorder characterized by bingeing followed by purges, compulsive bingeing refers to consuming a large amount of food in a short period of time and then getting rid of it, vomiting or taking laxatives. Other weight loss efforts may include the use of diuretics, stimulants, water fasting, or excessive exercise.

Most people with bulimia are of normal weight, forcing vomiting can result in thickened skin on the knuckles and broken teeth. It is frequently associated with other mental disorders such as depression , anxiety, and drug or alcohol problems , where there is an increased risk of suicide and self-harm.

Although it is more common among young women, bulimia can affect women and men of all ages. When you struggle with an eating disorder, life is a constant battle between the desire to lose weight and the overwhelming compulsion to overeat.

There are two common types of bulimia, which are as follows:

Purgative type: The person regularly performs self-induced vomiting or the incorrect use of laxatives, diuretics or enemas.

Non-purgative type: The person has used other inappropriate compensatory behaviors, such as fasting or excessive exercise, but has not regularly engaged in self-induced vomiting or misuse of laxatives, diuretics, or enemas.

What are the symptoms of bulimia nervosa?

What are the causes of bulimia nervosa?

While there is no known specific cause for bulimia, family history and environmental stressors are believed to contribute to the development of the disease. In general, while people who have relatives with bulimia are at higher risk of developing the disorder, this can be both the result of inherited perfectionism and rigidity, as it is an inheritance of the disorder itself. Some life stressors, such as family financial problems, can increase the chances of developing bulimia as an adult.

How is bulimia nervosa diagnosed?

Your doctor will use a variety of tests to diagnose it. First, they will perform a physical exam, blood or urine tests, and a psychological evaluation will help determine your relationship to food and body image.

Your doctor will also use the criteria from the Diagnostic and Statistical Manual of Mental Disorders (DSM-5), which is a diagnostic tool that uses standard language and criteria to diagnose mental disorders. The criteria used to diagnose bulimia include:

The severity of your bulimia can be determined by how often, on average, you binge or purge. The DSM-5 classifies bulimia from mild to extreme:

You may need more tests if you have had bulimia for a long time, these tests can detect complications that could include problems with your heart or other organs.

What is the treatment for bulimia nervosa?

Studies on the efficacy of treatment for bulimia seem to show that psychotherapy is superior to medication or behavioral therapy, cognitive behavior therapy is thought to be somewhat superior to other forms of psychotherapy in treating this eating disorder . This form of psychotherapy helps alleviate bulimia and reduces the likelihood of it coming back by helping the patient with an eating disorder change their thinking about certain problems. In cognitive behavioral therapy , the therapist uses three techniques to achieve these goals:

Didactic component: This phase helps establish positive expectations for therapy and promotes the person’s cooperation with the treatment process.

Cognitive component: This helps to identify the thoughts and assumptions that influence the behaviors of the bulimic individual, particularly those that can predispose the patient to disorderly eating.

The family therapy is also often used to treat bulimia, particularly for adolescents who suffer. It generally takes place in three phases:

The nutritional advice is to teach the bulimic individual how to diet healthily, have been found to help reduce the tendency of the patient to participate in purging behaviors.

With regard to drug treatment for bulimia, the United States has approved fluoxetine (Prozac) for the treatment of this condition, which is a member of the serotonergic antidepressants, as well as serotonin / norepinephrine reuptake inhibitors such as venlafaxine ( Effexor) and duloxetine (Cymbalta), and tricyclic antidepressants such as imipramine (Tofranil) and amitriptyline (Elavil), have also been shown to decrease binge and purge symptoms.

The antiepileptic drug topiramate (Topamax) has also been shown to significantly decrease binge eating and is sometimes used to treat people who do not respond to or have intolerable side effects from the other medications.

Steps to recovery from bulimia nervosa

Admit you have a problem . So far, you’ve invested in the idea that life will be better, that you will finally feel good, if you lose more weight and control what you eat. The first step in recovering from bulimia is admitting that your relationship with food is distorted and out of control.

Talk to someone. It can be difficult to talk about what is going on, especially if you have kept your bulimia a secret for a long time, you may feel embarrassed, ambivalent or fear what others will think but it is important to understand that you are not alone. Find a good listener – someone to support you as you try to improve yourself.

Stay away from people, places, and activities that are tempting to binge or purge. You may need to avoid looking at fashion or fitness magazines, spending less time with friends who constantly diet and talk about losing weight, and steer clear of weight loss websites, you may also need to be careful when it comes to plan meals and cook magazines and shows.

Address any underlying mood disorders. It is common for people with bulimia to also suffer from depression or anxiety, getting help for coexisting conditions is vital to their recovery from bulimia.

Seek professional help. Counseling and support from trained eating disorder professionals can help you regain your health, learn to eat normally again, and develop healthier attitudes about food and your body.

What are the complications of bulimia nervosa?

The potential dangers of bulimia can be serious and affect virtually all organ systems, malnutrition that can result from inducing vomiting and abusing laxatives, diet pills, and / or diuretics (medications that cause increased urination) can lead to low blood pressure to the point of fainting, cold hands and feet, abnormalities in body chemistry (abnormal electrolyte levels), as well as abnormal levels of hormones, lack of ovulation, and delayed puberty.

Is it possible to prevent bulimia?

Most bulimia prevention programs focus on educating the public and at-risk populations, such as adolescents, about the dangers of the disorder (psychoeducation). While psychoeducation has been found to increase the awareness of its recipients, studies show no more than minimal change in behavior. More successful than passive psychoeducation appear to be prevention approaches that specifically address disordered eating mindsets, such as viewing thinness as the ideal body type.