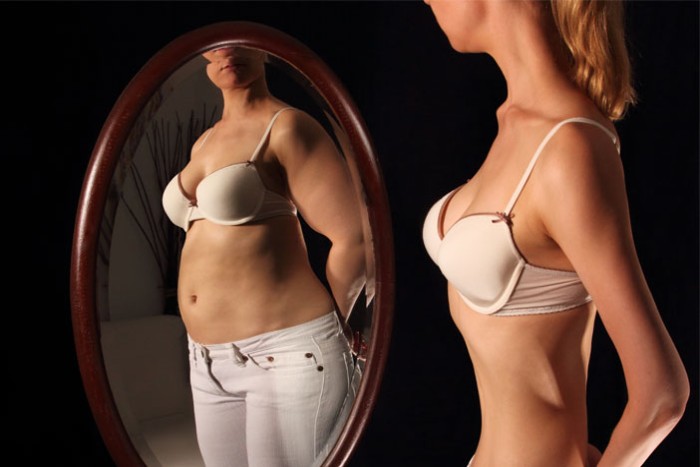 Many of us wish we could look different or that we could fix something about ourselves, that’s only human but if concern about being thin has taken over your habits, thoughts, and life, you may have an eating disorder . When you have anorexia nervosa  the desire to lose weight becomes more important than anything else, you may even lose the ability to see yourself as you really are, but you are not alone and recovery is possible, with the right treatment and support. You can break the self-destructive pattern and regain your health and self-confidence.

What is anorexia nervosa?

The anorexia nervosa , known simply as anorexia, is a type of eating disorder and is also a psychological disorder, which is a condition that goes beyond concerns about obesity or diet out of control, a person with anorexia often Initially you start dieting to lose weight over time, weight loss becomes a sign of mastery and control.

The drive to lose weight is actually secondary to concerns about control and / or fears related to the body itself, the individual continues the restrictive eating cycle, which becomes an obsession and, in this way, is similar to an addiction.

Many people with anorexia see themselves as overweight even though they are in fact underweight, if asked, they generally deny that they have an underweight problem and weigh themselves frequently, eating only small amounts and only certain foods. Some will exercise excessively, force themselves to vomit, or use laxatives to produce weight loss. Complications can include osteoporosis, infertility, and heart damage, among others. Women stop having menstrual periods.

People with this type of anorexia place severe restrictions on the amount and type of food they eat, this could include: counting calories, skipping meals, restricting certain foods (such as carbohydrates) and following obsessive rules, such as eating foods of one color in particular.

These behaviors can be accompanied by excessive exercise.

People with this type of anorexia also impose restrictions on the food they eat but it is accompanied by bingeing or purging, compulsive bingeing involves feeling out of control and eating a large amount of food. So, a person ‘compensates’ for this food by purging the food through vomiting, misuse of laxatives, diuretics, or enemas.

These behaviors are physically and mentally unhealthy, and can even be life threatening. It is important to seek ongoing therapy and nutritional education for the treatment of anorexia nervosa.

What are the symptoms of anorexia nervosa?

The exact cause is not known, people who develop anorexia may have a negative body image, they may be focused on being “perfect”, they may be looking for ways to control their lives. Other factors such as biology, environment, and psychology are believed to play a role.

Genetics and hormones could have an effect on the development of anorexia nervosa, some evidence suggests a link between it and serotonin, a chemical produced in the brain. Anorexia nervosa is highly inherited, twin studies have shown a heritability rate of between 28 and 58%. First-degree relatives of those who have it have about 12 times the risk of developing it.

Pressure from society to look slim can also contribute to the development of anorexia, unrealistic body images from media such as magazines and television can greatly influence young people and provoke the desire to be slim.

Early theories about the cause of anorexia linked it to child sexual abuse or dysfunctional families, the evidence is conflicting and well-designed research is needed. Fear of food is known as cybophobia, and it is part of the differential diagnosis. Other psychological causes include low self-esteem, feelings of lack of control, depression , anxiety, and loneliness.

A person with obsessive compulsive disorder (OCD) might be more predisposed to stick to a strict diet and exercise regimen than people with anorexia nervosa, this is because people with OCD are prone to obsessions and compulsions.

The increase in anorexia nervosa has been linked to vulnerability and internalization of body ideals, people in activities or professions where there is a particular social pressure to be thin (such as models and dancers) are more likely to develop anorexia, and a much higher contact with cultural sources that promote weight loss.

This trend can also be observed for people who participate in certain sports, such as wrestlers. There is a higher incidence and prevalence of anorexia nervosa in sports, with an emphasis on aesthetics, where low body fat is advantageous, and sports in which one has to gain weight for competition. Family dynamics can play a role in the cause, as when people constantly feel pressured to be thin, teasing and bullying can lead to low self-esteem and other psychological symptoms.

How is anorexia nervosa diagnosed?

Your doctor will perform a physical exam to check your blood pressure and heart rate, they will also do a psychological exam or refer you to a mental health professional who will ask about your eating habits and feelings. They will look for any criteria that show that:

Your doctor may order certain lab tests such as blood tests to check your electrolyte levels and liver and kidney function. In addition, it can monitor your bone density and detect heart irregularities. You can order other lab tests to rule out other possible causes of weight loss, such as celiac disease and inflammatory bowel disease.

What treatment is effective for anorexia nervosa?

One of the biggest obstacles in treatment is realizing that you need help. Many with anorexia do not believe they have a problem and that can make treatment difficult.

The main goal is to restore your body to a normal weight and establish normal eating habits, a dietitian will help you learn to eat properly, your family may also be recommended to participate in therapy with you. For many people, anorexia nervosa is a lifelong challenge.

You and your family must work hard to overcome anorexia, individual, family and group therapies are often an integral part of treatment.

A form of therapy called cognitive behavioral therapy is used to help change unhealthy thoughts and behaviors. Its goal is to help you learn and deal with strong emotions and develop healthy self-esteem.

The family therapy involves family members to keep on track with your diet and healthy lifestyle and helps resolve conflicts within the family. It can create support for the family member to learn to cope with anorexia nervosa.

Group therapy allows people with anorexia to interact with other people who have the same disorder, but it can sometimes lead to thinner competition. To avoid that, it is important that you attend group therapy led by a qualified medical professional.

Although at this time there is no medication that demonstrates the treatment of anorexia nervosa, antidepressants may be prescribed to treat the anxiety and depression that are common in these people, which may make you feel better, but antidepressants do not decrease the desire for lose weight.

Depending on the severity of your weight loss, your primary care provider may want to keep you in the hospital for a few days to treat the effects of your anorexia nervosa, you may have a feeding tube and IV fluids if your weight it is too low or if you are dehydrated. If you continue to refuse to eat or develop psychiatric problems, your doctor may have you admitted to the hospital for intensive treatment.

What are the complications?

They can affect the whole body system and be serious. Physical complications include:

About 1 in 10 cases are fatal, in addition to the physical effects of poor nutrition, there may be an increased risk of suicide , one in 5 deaths related to anorexia comes from suicide .

Although the restrictive eating patterns that characterize this anorexic eating disorder are similar to dieting behaviors, there are marked differences between the two. The effects of the extreme behaviors that result from this disease are far more devastating and consequential than any negative effects of diet.

How can anorexia nervosa be prevented?

Although educating the public about the important health benefits of proper nutrition is generally beneficial, it has been found to be less specifically helpful in preventing eating disorders and other body image problems. The most effective approaches are believed to be the addition of education on the bias of media images towards excessive thinness as desirable, helping people internalize their own image, and health behaviors that are inconsistent with those of disorderly individuals. .