Skip to content
PsychoTreat > Disorders > What is a nightmare? – Causes, Symptoms, Prevention 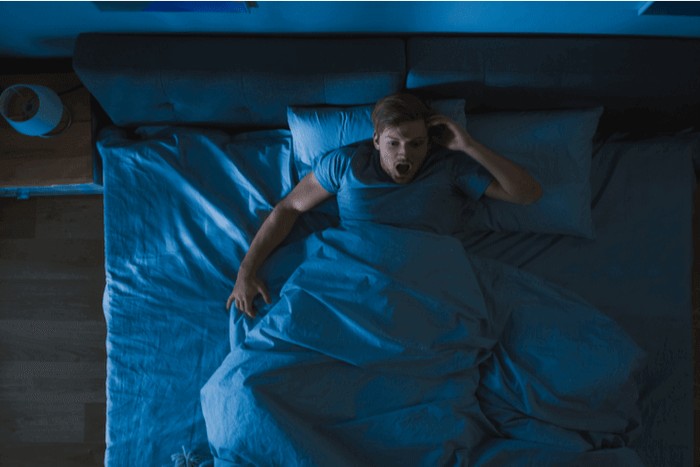 A nightmare , also called a bad dream, is an unpleasant dream that can cause a strong emotional response from the mind, typically fear but also despair, anxiety and great sadness, the dream can contain situations of discomfort, psychological and physical terror or panic. After a nightmare, a person wakes up in a state of distress and may not be able to go back to sleep for a short period of time. Recurring nightmares may require medical help, as they can interfere with sleep patterns and cause insomnia .

Most nightmares involve a threat or dangerous situation that the sleeper feels unable to control during sleep. Throughout history, demon visits have been attributed to evidence of some kind of underlying disturbance. Today, it is recognized that occasional nightmares are a normal event as everyone has ever experienced a nightmare at some point, although adults seem to have bad dreams less often than children and these can include monsters or other scary figures. or situations such as being chased or other danger.

Nightmares are not the same as night terrors, children who experience it typically do not vocalize or move, on the contrary, night terrors are associated with crying or screaming and movement when the child appears to be terrified. Children who experience night terrors remain asleep throughout the event and do not remember what happened the next day and do not occur during non-REM sleep and often occur during the first half of the night.

What Causes a Nightmare?

Nightmare themes vary widely from person to person, but common themes include chasing, falling, or feeling lost or trapped, these can cause you to feel various emotions , including:

You can continue to experience these emotions even after waking up.

Nightmares seem to be part of normal development, and except in the case of post-traumatic stress disorder , they are usually not symptoms of any underlying medical condition or mental disorder.

However, they can become a problem if they persist and interrupt your sleep pattern, as it can lead to insomnia and difficulty in doing different activities during the day. Check with your doctor if you have trouble coping with nightmares.

They can be triggered by a variety of factors, including:

It is important to note that nightmares are not the same as sleepwalking, which causes a person to walk while asleep, they also differ from night terrors. Children who have night terrors sleep through episodes and generally do not remember morning incidents, may have a tendency to sleepwalking or urinate in bed during night terrors, and stop once the child reaches puberty. However, some adults may have them and experience limited dream memories, especially during times of stress .

Symptoms of a nightmare

Not having a general medical condition and not using medications or other substances that can cause these symptoms. About 50 percent of adults experience occasional nightmares, women more often than men, but they do not require treatment. Adverse events, trauma, lack of sleep, an irregular sleep schedule and jet lag can cause an increase in nightmares, approximately 1 percent of adults who experience frequent nightmares should seek help if this leads to avoidance sleep or affect your work or social functioning.

When do nightmares happen?

Dreams and nightmares occur during REM (rapid eye movement) sleep, sleep is classified into REM and non-REM stages, and most people experience four to five sleep cycles each night. Each cycle lasts 90 to 100 minutes, and REM sleep occurs most often during the second half of the night. Nightmares commonly occur at this time.

What is the treatment for nightmares?

Research suggests that dreams can be affected by conscious thought before bed, remembering funny events or funny stories can sometimes help derail a nightmare before it begins.

How to prevent a nightmare?

Practicing good sleep hygiene is important for everyone who has experienced nightmares. This includes:

Establish a bedtime routine that begins at the same time every afternoon and make bedtime a safe and comfortable time.

Using a night light can reduce fear or anxiety,
talking about “monsters” either under the bed or in the closet, and showing the child that there is nothing harmful can be reassuring, and
imagining alternative endings to nightmares can provide the child with a sense of empowerment before going to sleep.

Have your child talk to the characters in the nightmare, give him stuffed animals, blankets or other items for comfort at night, use a night light, and leave the bedroom door open at night.

Improvement in sleep / wake cycles can be seen with:

If nightmares occur frequently (more than two nights a week for many months), a psychological evaluation is suggested. Different types of psychotherapy , including cognitive behavioral therapy and hypnosis , can be beneficial in reducing the frequency of nightmares.

What is the prognosis for nightmares?

Most people who have experienced a nightmare find that this is an isolated event, the long-term outcome is generally good. If nightmares occur frequently over several months or after a traumatic event, evaluation by a psychologist or psychotherapist is recommended.

Nightmares are not associated with sleepwalking or other parasomnias ( disturbing sleep disorders ).