Asperger Syndrome used to be an independent state, but in 2013, it was included in the category of autism spectrum disorder in the Diagnostic and Statistical Manual of Mental Disorder 5 (DSM-5). A person with this condition finds it more difficult to read social cues, and it is more difficult for him to communicate and interact with others. These difficulties can lead to anxiety and confusion. It affects between 0.03 to 4.84 of every 1000 people, men about four times more than women.

What is Asperger syndrome?

It is a developmental disorder characterized by significant difficulties in social interaction and non-verbal communication and restricted and repetitive patterns of behavior and interests. A milder autism spectrum disorder differs from others by relatively standard language and intelligence; although not necessary for diagnosis, physical clumsiness and unusual use of language are typical. The signs generally begin before the age of two and typically last a lifetime.

It seems that the brains of people with Asperger’s syndrome do not treat the information in the same way as the brains of others. People who suffer from it have average or above-average intelligence and can be pretty creative, but they find life difficult. In particular, they find it challenging to communicate and interact with other people.

Also known as Asperger’s disorder, it was first described in the 1940s by the Viennese pediatrician Hans Asperger, who observed autism-like behaviors and difficulties with social and communication skills in children who had average intelligence and language development. . Many professionals felt that the syndrome was simply a milder form of autism and used the term “high-functioning autism” to describe these individuals. Uta Frith, professor at the Institute of Cognitive Neuroscience at University College London and editor of Autism and Asperger Syndrome, describes individuals with Asperger’s as “with a hint of autism.”

The disorder was added to the American Psychiatric Association’s Diagnostic and Statistical Manual of Mental Disorders (DSM-IV) in 1994 as a separate disorder from autism. However, many professionals still regard it as a less severe form of autism. In 2013, DSM-5 replaced autistic disorder, Asperger’s disorder, and other pervasive developmental disorders with the global diagnosis of autism spectrum disorder.

Characteristics and symptoms of Asperger’s syndrome

People with this syndrome show restricted or specialized interests, such as a pervasive developmental disorder, distinguished by a pattern of symptoms rather than a single sign. It is characterized by qualitative impairment in social interaction, stereotyped and restricted patterns of behavior, activities, and interests, and no clinically significant delay in cognitive development or general delay in language.

Intense preoccupation with a restricted topic, one-sided verbosity, restricted prosody, and physical clumsiness are typical of the condition but are not necessary for diagnosis. Suicidal behavior appears to occur at rates similar to those that do not.

The demonstrated lack of empathy affects aspects of community life of people with Asperger syndrome since difficulties are experienced in the essential elements of social interaction, which may include failure to develop friendships or seek shared joys or achievements with others (for example, show other objects of interest); a lack of social or emotional reciprocity (social mechanics of giving and take “games”); and impaired nonverbal behaviors in areas such as eye contact, facial expression, posture, and gesture.

People may not be as withdrawn from others as those with other more debilitating forms of autism. They do approach others, albeit awkwardly. For example, you may engage in a long, one-sided speech on a favorite topic while misunderstanding or failing to recognize the listener’s feelings or reactions, such as a desire to change the topic of conversation or end the interaction. This social discomfort has been called “active but strange.” Such failures to react appropriately can appear to disregard other people’s feelings and appear insensitive.

Some may even show selective mutism, not speaking at all to most people and excessively to specific others, and some may choose to only talk to people they like.

The hypothesis that individuals with Asperger syndrome are predisposed to violent or criminal behavior has been investigated but is not supported by data. Evidence suggests that diagnosed children are victims rather than offenders.

A 2008 review found that many reported violent offenders with Asperger’s syndrome also had other coexisting psychotic psychiatric disorders, such as schizoaffective disorder.

Restricted and repetitive interests and behavior

People may display behaviors, interests, and activities that are restricted and repetitive and sometimes abnormally intense or focused. They may adhere to inflexible routines, move in stereotypical and repetitive ways, worry about parts of objects, or engage in compulsive behaviors such as lining up things to form patterns.

The search for specific and narrow areas of interest is one of the most surprising features. They can gather volumes of detailed information on a relatively limited subject, such as meteorological data or the names of stars, without necessarily understanding the issue. Large. For example, a child can memorize camera model numbers without worrying about photography.

This behavior is usually evident by age 5 or 6. However, these special interests can change from time to time. They typically become more unusual and narrowly focused and often dominate social interaction so that the whole family can dive in. Because restricted topics capture children’s interest, this symptom can go unnoticed.

Stereotypical and repetitive motor behaviors are a central part of the diagnosis, including hand movements, such as flapping or twisting, and complex movements of the whole body. These are usually repeated in longer bursts and are more voluntary or ritualistic than tics, which tend to be faster, less rhythmic, and less frequent.

Although people with Asperger syndrome acquire language skills without significant overall delay and their speech typically lacks abnormalities, language acquisition, and use are atypical. Exceptions include verbosity, abrupt transitions, literal interpretations and misunderstanding of nuances, use of the meaningful metaphor for the speaker only, auditory perception deficits, unusually pedantic, formal, or idiosyncratic speech, and oddities in volume, tone, intonation, prosody, and rhythm.

Three aspects of communication patterns are of clinical interest: poor prosody, tangential and circumstantial speech, and marked verbosity; although inflection and intonation may be less rigid or monotonous than in classic autism, they have a limited range of intonation, the speech may be unusually fast, jerky or voiced, may convey a sense of incoherence; conversational style including monologues on topics that bore the listener, does not provide context for comments, or does not suppress inner thoughts.

People with the syndrome may not detect whether the listener is interested or engaged in the conversation. The speaker’s conclusion or point may never be made, and the listener’s attempts to explain the content of the speech or logic, or switch to related topics, are unsuccessful.

People with Asperger syndrome may have signs or symptoms independent of the diagnosis, but that can affect the individual or the family. These include differences in perception and motor skills, sleep, and emotional problems.

They often have an excellent auditory and visual perception and demonstrate the improved perception of small changes in patterns, such as arrangements of well-known objects or images. This is usually domain-specific and involves the processing of fine-grained features. In contrast, people with high-functioning autism have deficits in some tasks involving visual-spatial perception, auditory perception, or visual memory.

Many accounts report other unusual sensory and perceptual abilities and experiences; they may be unusually sensitive or insensitive to sound, light, and other stimuli. These sensory responses are found in other developmental disorders and are not specific. There is little support for a more significant fight or flight response or lack of habituation in autism; there is more evidence of decreased response to sensory stimuli, although several studies show no difference.

The cause of Asperger syndrome is unknown. There is likely a genetic component to this syndrome. Since the disease has been observed to run in families, environmental influences also probably play a role. Although concerns persist among some families that vaccines and preservatives in vaccines may play a role in developing the syndrome and other autism spectrum disorders, experts have debunked this theory.

Asperger syndrome is much more common in boys than girls. It is five times more common in boys. The number of children diagnosed with autism spectrum disorders is increasing in the US, and recent studies show that about 1 in 110 have it. It is not entirely clear whether the increase in the number of children is due to improvements and modifications in the diagnostic process or some degree of natural increase in the incidence of the disorders themselves. Both factors are probably involved. 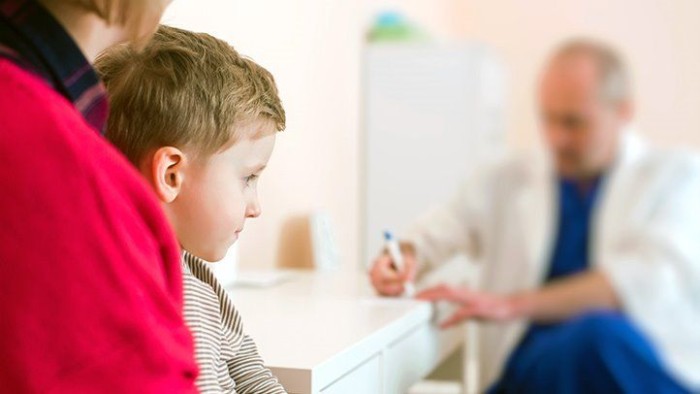 A diagnosis is the formal identification of the condition, usually by a multidisciplinary diagnostic team, often including a speech and language therapist, pediatrician, psychiatrist, and psychologist. Asperger syndrome varies widely from Person-to-person and making a diagnosis can be difficult. It is diagnosed later in children than in autism, and sometimes difficulties may not be recognized and diagnosed until adulthood.

An interdisciplinary team is generally required for a comprehensive clinical evaluation. This evaluation should include a psychological evaluation (which includes, at a minimum, intellectual and adaptive functioning), a communication evaluation (primarily focused on non-verbal forms of communication ), and a neurological, psychiatric, and medical evaluation. Academic tests can be of specific help, as verbal scores are often significantly higher than performance scores for children with Asperger syndrome.

Benefits of a diagnosis

Some people view a formal diagnosis as a useless label, but for many, getting a timely and thorough evaluation and diagnosis can be helpful because:

Treatment attempts to manage distressing symptoms and teach age-appropriate social, communication, and vocational skills that do not come naturally during development, with intervention tailored to the individual’s needs based on a multidisciplinary assessment. Although progress has been made, the data supporting the efficacy of particular interventions is limited.

The ideal treatment coordinates therapies that address the main symptoms of the disorder, including poor communication skills and obsessive or repetitive routines. However, most professionals agree that the sooner the intervention is better, there is no single better treatment package as it resembles others on the high functioning autism spectrum, except that it considers people’s language abilities, verbal strengths, and non-verbal vulnerabilities. A typical program generally includes:

No drug directly treats core symptoms; although research on the efficacy of the pharmaceutical intervention is limited, it is essential for diagnosing and treating comorbid conditions. Deficits in self-identifying emotions or observing the effects of behavior on others can make it difficult for people to see why medications may be appropriate.

Medication can be effective with behavioral interventions and environmental adaptations, such as anxiety disorders, major depressive disorder, inattention, and aggression. The atypical antipsychotic medications risperidone, olanzapine, and aripiprazole have been shown to reduce associated symptoms; risperidone may reduce repetitive and self-injurious behaviors, aggressive outbursts, and impulsivity and improve stereotypic patterns, behavior, and social relationships.

Care must be taken with medications, as side effects can be more common and more difficult to assess in people. The efficacy trials of drugs against comorbid conditions routinely exclude individuals from the autism spectrum. Abnormalities in metabolism, cardiac conduction times, and an increased risk of type 2 diabetes have been raised by concern with these medications and long-term severe neurological side effects.

SSRIs can lead to manifestations of behavioral activation, such as increased impulsivity, aggression, and sleep disturbance. Weight gain and fatigue are common side effects of risperidone, leading to an increased risk of extrapyramidal symptoms, such as restlessness and dystonia and increased serum prolactin levels.