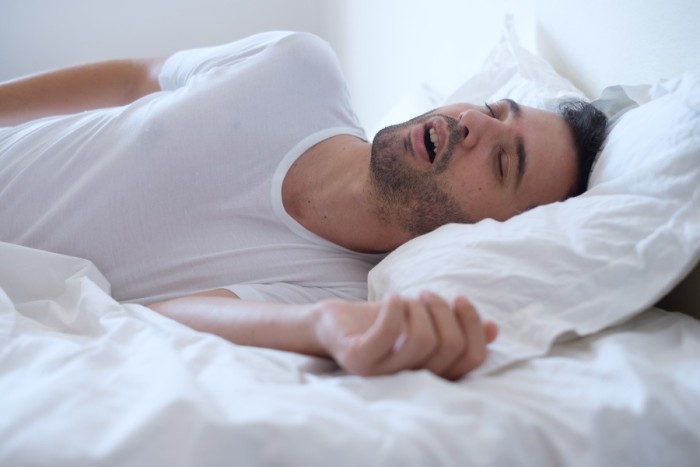 The term central sleep apnea encompasses a heterogeneous group of sleep-related breathing disorders in which respiratory effort is decreased or absent intermittently or cyclically. In most cases, it is associated with obstructive sleep apnea syndromes or caused by an underlying medical condition, recent high-altitude ascent, or narcotic use. Primary central sleep apnea is a rare condition, the etiology of which is not fully understood.

What is central sleep apnea?

It is a sleep-related disorder in which the effort to breathe is decreased or absent, usually for 10 to 30 seconds intermittently or in cycles, and is associated with a reduction in oxygen saturation in the blood, which is It is due to an instability in the body’s feedback mechanisms that control respiration. Central sleep apnea can also be an indicator of Arnold-Chiari malformation.

What are the signs and symptoms of central sleep apnea syndrome?

The main symptom is the temporary interruption of breathing while sleeping, although snoring is a very strong symptom of obstructive sleep apnea, it is not usually found in central sleep apnea.

Symptoms can also include:

The causes of central sleep apnea are complex, involving the cardiovascular system (heart), the pulmonary system (lungs), and the autonomic nervous system (brain and nerves).

The precise cause is not yet fully known, several factors are believed to contribute to central sleep apnea, including:

Some medications can also cause a type of central sleep apnea called drug-induced apnea, opioids are powerful pain relievers that can lead to irregular breathing patterns. In some cases, you may temporarily stop breathing as part of this irregular pattern.

Medications that can contribute to apnea include:

How is central sleep apnea diagnosed?

If you have any of these symptoms of central sleep apnea, or if a family member or bed partner notices that you stop breathing while you sleep, you should speak with your doctor or healthcare provider.

If your doctor suspects that you have central sleep apnea, they will likely perform a physical exam, take a medical history, and recommend a sleep history. The next step will likely be a nocturnal sleep study called a polysomnogram, this test is performed in a sleep laboratory under the direct supervision of a trained technologist. During the test, the following bodily functions can be monitored:

After the study is complete, the technologist will calculate the number of times that breathing is affected during sleep and then assess the severity of the sleep apnea.

Because apnea is closely related to disorders of the brain and heart, neurologists, cardiologists, and other specialists can be involved in the diagnosis.

After a patient receives a diagnosis, the doctor who performs it can provide different treatment options, if the central sleep apnea is induced by drugs (for example, opioids), the reduction of the dose or the eventual withdrawal of the medication. Offensive often improves the situation.

Because it is characterized by apneas (breathing interruptions) that appear or persist during traditional sleep apnea therapies, treatment can be complex. Your doctor may start by treating other conditions that increase your risk, such as heart failure.

In positive airway pressure therapies , this type of treatment remains effective in managing central sleep apnea. When used, specialists work closely with patients to ensure that the device fits well and works properly. Doctors can adjust the air pressure of the device if necessary, if the device is uncomfortable or does not resolve apneas, alternative types are available.

Another treatment that uses pressurized air is adaptive servoventilation , this therapy adjusts the respiratory pressure for each breath to smooth the pattern and can automatically release a breath if it is stopped for a period of time. This treatment is not recommended for patients with certain types of heart failure.

Supplemental oxygen can also be used to increase blood oxygen levels at night without the use of airway pressure.

Some people with the syndrome cannot tolerate the use or therapies of airway pressure or supplemental oxygen, these patients can be helped by certain medications, such as theophylline or acetazolamide, these medications can also be used to help prevent apneas high altitude-induced sleep centrals.

It is very important to distinguish between central sleep apnea and obstructive apnea, although the two conditions can be present at the same time.

Obstructive sleep apnea is characterized by repetitive episodes of obstructed breathing, usually due to a narrow and collapsible airway. In patients with this problem, the thoracic (chest) and abdominal (diaphragm) muscles continue their efforts to move air in and out of the lungs, even though the airways are obstructed. The levels of oxygen and carbon dioxide in the bloodstream reach dangerous levels if the pathway is blocked for too long. The brain feels it and intervenes, stimulating the body to breathe more deeply and overcome the obstruction, breathing resumes again, but at the cost of interrupted sleep.

Central sleep apnea is characterized by repetitive episodes of shallow or absent breathing, which result from temporary loss of ventilatory effort, that is, breathing ceases because the thoracic and abdominal muscles lose the brain’s instruction to continue moving air to and from from the lungs.

Breathing usually starts again on time, once the levels of blood oxygen and carbon dioxide change enough to stimulate breathing again, but this is often associated with arousal from sleep, leading to difficulties. to keep you sleepy and tired during the day. Central sleep apnea can occur in the absence or presence of obstructive sleep apnea.