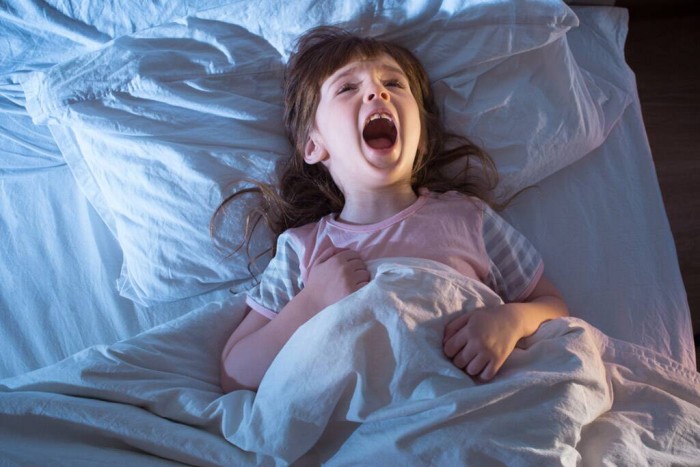 Night terrors are common episodes that cause scares at night, especially in children; they are different from nightmares and can be distressing for the person who has them and their families.

While people talk about it, this is not a diagnosable condition, according to the Diagnostic and Statistical Manual Fifth Edition (DSM-V). It contains elements of the conditions known as Nightmare Disorder, REM Sleep Conduct Disorder, and Non-Rapid Eye Movement (NREM) Sleep Disorder. Although nighttime episodes can be terrifying, night terrors aren’t usually a sign of something more serious; they tend to end as abruptly as they begin.

What are night terrors?

They are a non-REM sleep disturbance that involves experiencing parasomnia (involuntary movement) during an incomplete awakening from a deep sleep. Night terrors often occur in the middle of the night. They are partial awakenings from rest in which a child may scream and kick as if in intense panic.

During a night of terror, the child may be sitting on the bed with his eyes wide open, but he will probably not notice the presence of his parents. Children who experience night terrors cannot be comforted or awakened and will not have memories of subsequent events; occasionally, they may recall vague information about the event, such as feelings of an indistinct threat from which they had to defend themselves.

The episodes last between 10-30 minutes and affect approximately 3% of children aged 4 to 12 years, with a maximum prevalence between the ages of 5 to 7, and are more common among children who have relatives who have had the disorder.

Like lucid dreams, night terrors are best viewed as altered states of consciousness, as a child abruptly wakes up, even if only partially, from resting-state IV, the deepest stage. You are no longer fully asleep, but you are not fully awake either; it is a bit of both; it is a mixed state.

Nightmares (bad dreams that cause horror or fear) are prevalent in childhood and adulthood; night terrors occur less frequently.

During a typical episode, someone with this sleep disorder may:

People with night terrors can also show the following physiological responses, which can often be confirmed in a sleep study:

The typical night terror episode usually begins about 90 minutes after falling asleep. You sit up in bed and scream, appearing awake but confused, disoriented, and unresponsive to stimuli. Most episodes last 1 to 2 minutes but can last up to 30 minutes before you relax and return to regular sleep; if you wake up during a night of terror, only small fragments of the episode will be remembered. It should be noted that the child does not remember what happened when he wakes up in the morning.

How are night terrors diagnosed?

Usually, a complete history and physical exam are sufficient to diagnose night terrors; if other disorders are suspected, additional tests may be helpful to exclude them:

An EEG, a test to measure brain activity, may be done if a seizure disorder is suspected.

A polysomnogram (a combination of tests used to check for proper breathing while you are asleep) may be done if a breathing disorder is suspected.

CT scans and MRIs are generally not necessary.

Several factors can contribute to night terrors. These include:

In 2014, a study of nearly 7,000 children between the ages of 8 and 10, with a follow-up around 13 years, showed that those who were bullied were more than twice as likely to experience night terrors. It can also be associated with other conditions such as breathing problems while sleeping, such as apnea, migraines, head injuries, restless leg syndrome, and certain medications.

A study that evaluated 661 people with Parkinson’s disease, ages 43 to 89, reported that 3.9 percent had night terrors, 17.2 percent had nightmares, and 1.8 percent experienced sleepwalking.

When should I be concerned about night terrors?

If a child’s night terrors are so severe that they risk hurting themselves or others, medical attention is warranted. In sporadic cases, a short course with an antidepressant or anti-anxiety medication may be prescribed; this is done not because someone believes that the child has a psychiatric disorder but because we have no other tool available to prevent injury during a violent night terror.

If the beating of a child is more rhythmic or involves only one limb and occurs primarily in the early morning, as opposed to the afternoon, there is a possibility that what is happening is seizure activity rather than night terror. The difference in appearance between a night terror and an attack is usually very marked, but if in doubt, consult a doctor.

Night terrors are pretty common in young children and generally do not require medical treatment; Eventually, this stage will pass by itself. If you are the parent of a child with this disorder, the best thing to do is to monitor him and make sure he does not get hurt if he falls out of bed or goes down the stairs, you can try to restrain the child and speak calmly until he returns gently. Fall sleep.

A visit to a specialist may be for older children and adults who find that their sleep suffers. Your doctor may ask you to keep a sleep diary for a few weeks to track your symptoms and what precedes them. (For example, are you going through a stressful period? Do you have any other signs or behaviors that may affect your sleep?)

A doctor may recommend a polysomnogram (nocturnal sleep study) to confirm a diagnosis and determine if it is another undiagnosed condition, such as apnea or restless leg syndrome, which may contribute to the night terrors.

If sleep apnea is the cause of your night terrors, your specialist will advise you to treat it quickly. Treating that underlying condition solves the problem if another medical condition is found.

In cases of stress, anxiety, and depression, talk therapy, counseling, stress management techniques, or medications can help improve your symptoms.

In a few cases, medications that act on the central nervous system may be prescribed to help people sleep through the night without incident. However, drugs are rarely prescribed for night terrors; managing your stress level, practicing good sleep hygiene, and addressing underlying health issues are higher priorities and generally have a more lasting impact.

Treatment is usually necessary only if the episodes have a significant adverse effect on the safety of the person or their family or if the problem affects their ability to function during the day.

Simple solutions to do at home

Stress:  Identify any sources of stress and ways to relieve them; if a child experiences night terrors, ask them to tell you something that is bothering them and talk about it.

Get more sleep: Sleep deprivation can be a factor, so try going to bed earlier or napping in the afternoon, as having a relaxation routine before bed can also help, for example, taking a bath warm or reading the light before sleeping, avoid screen time, whether from the tv or cell phone, for at least an hour before bedtime.

Look for patterns:  Keep a sleep diary and note how often terrors occur and when they start. If night terrors are bothersome and occur regularly, a suggestion is to wake your child 15 minutes before they occur, keep them awake for 5 minutes, and then let them go back to sleep.

What are the differences between nightmares and night terrors?

One of the most significant differences between nightmares and night terrors is awareness on the part of the child. With monsters, children can recall the experience in vivid detail, and with night terrors, they usually have no recollection of the event the following day.

Night terrors can be confusing, and the child is most likely unaware of a parent in the room. With nightmares, there is little or no confusion, and the child seeks out a parent to help mitigate his fears.

Night terrors occur during non-rapid eye movement sleep, during the short-wave sleep period, and during the first few hours of sleep before REM sleep occurs. Nightmares most often occur later during REM sleep, where dreams are more frequent.