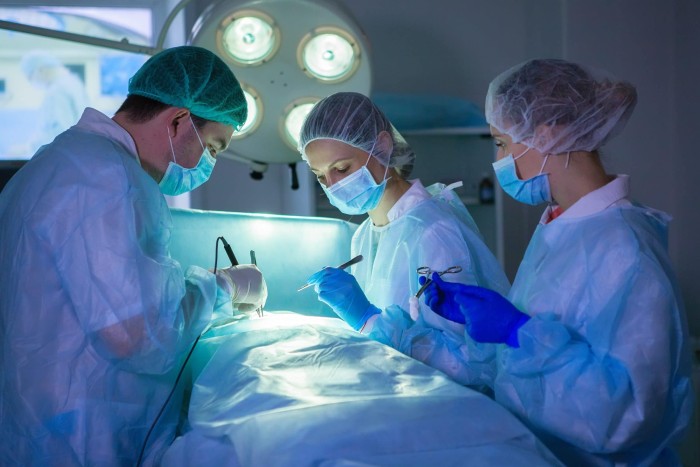 The fear of medical procedures. Most people suffer from anxiety about medical practices during their lifetime. There are many different aspects to this fear, and not all have all the parts.

These parts include fear of surgery, the anxiety of dental work, and fear of doctors (which implies fear of needles ). These fears are often overlooked, but they can be detrimental to their health when a patient has gone to the extreme.

Classification of fear of medical procedures

Fear of medical procedures can be classified into a broader category of ” phobias of blood, injections, and injuries.” It is one of the five subtypes that classify specific phobias. A specific phobia is a “marked and persistent fear that is excessive or unreasonable, caused by the presence (or anticipation) of a specific object or situation.”

These fears often begin to appear in childhood, around five to nine. It seems natural to become apprehensive when seeing blood, injuries, or severe deformities, but many overcome these fears when they reach adulthood.

Those who don’t are more likely to avoid medical and dental procedures necessary to maintain health, work, etc. Research shows that when people encounter something that they have a specific phobia of, many feel disgusted, which makes them not want to approach or experience what is disgusting to them. Women avoid getting pregnant because they require blood tests and doctors that they would rather avoid.

This fainting can also lead to seizures, making life very difficult for people with this fear. However, only 4.5% of people who have this phobia in childhood will have this fear during their entire life.

For people who significantly experience this phobia, specific treatments to cope with the situation have been found to help them.

Fear of surgery or another invasive medical procedure can be known as homophobia. The fear of surgery is not a fear that is frequently experienced, but it is still just as damaging as the more common ones.

Because surgery is not a common occurrence, the fear is based more on inexperience or something out of the ordinary. This fear is one of those that fall under all the fears of medical procedures that can be experienced by anyone of all ages and that have little need for natural psychological treatment unless it is unusually causing the patient to react in a way that could be detrimental to your health.

But imagine what goes through the mind of a three-year-old when he sees a doctor or nurse dressed in a surgical mask: «

It’s a monster! It has big eyes and no mouth! It’s taking me away from Mom and Dad. It’s no wonder that half of all children ages 2 to 10 show signs of distress – from bedwetting to nightmares – for at least two weeks after their operation.

This statement shows that the fear that arises when young children enter the operating room can be a serious matter because they are still traumatized by the effects for weeks after the surgery.

Fear of surgery has led to ” eating disorders, sleep disorders , regression to earlier levels of behavior, depression, and somatizations such as loss of voice after tonsillectomy.”

Many children view surgery as a form of punishment. Because they sometimes cannot see what they did “wrong,” the fear intensifies, leaving a greater possibility of a more prolonged effect on the child’s psychological and emotional feelings.

Many ways have been tried to help children overcome this fear, including their parents and doctors simply telling them that the surgery will not hurt them or sedatives administered by the doctor to minimize feelings of anxiety later.

Certain types of treatments are better methods than others. Some hospitals allow parents to enter the operating room and stay with the child, calming him down until the anesthesia has taken effect.

If the child can go into surgery calmly, he is much less likely to have many complications after surgery due to fear.

Other ways to treat fear of surgery for children include having a doctor explain what the surgery will do and performing the operation on a doll or stuffed animal.

This makes the surgery less scary and can be understood in the child’s mind. When the child understands the surgery, fear of the unknown is less of a factor in how scared the child will be and how much it will affect his reaction to the surgery.

Children are not the only ones who express fear of surgery or have side effects that can affect the person’s mental and physical well-being. Most adults fear the pain they expect to receive from surgery.

“The Roche Pain Management Survey surveyed 500 Americans, of whom 27% had surgery in the past five years. Of those who had surgery, 77% reported pain afterward, and four out of five said they experienced moderate to extreme pain.

70% indicated that they experienced pain even after receiving the medication; 80% reported that they received pain medication on time, although 33% had to ask for it; and 16% had to wait for the drug.

Unlike children, adults seem to be less afraid of the surgery itself but somewhat afraid of its effects. In 1980, Milan and Kornfeld said that “any operation is a destructive invasion of the body and therefore scares many patients.”

Some operations seem to invoke more fear in patients than others. Although success is very likely, older people who require cataract surgery often fear the procedure.

The fear of going blind from surgery is more evident in women, who especially fear surgery more than men. A cataract is a disease that attacks the lens, causing it to swell until vision darkens.

The operation is recommended when the disease begins to interfere with daily activities. Although blindness was the only option without surgery, more than 25% of the patients feared going blind due to the surgery: 34% feared the failure of the operation.

Ritva Fagerström, about the fears of cataract surgery, said: “These fears are understandable since the state of the retina was not known in advance.” Two of the 75 women who participated in a study on the fear of cataract surgery considered the experience of the first operation to be so bad that they were not willing to undergo the second eye procedure.

If a patient had this fear, understandably, and did not undergo surgery, the blindness that would follow would prevent him from doing everyday things, quickly leading to depression or other dangerous situations that would be destructive to his overall health. The ways to overcome this fear are specific to the individual.

Adults often seem less fearful when given more information about the surgery, who will be doing it, or what to expect during recovery; 69% say they have received a lot of information, and half of the patients trust the ophthalmologist to do the best he can.

Although adults are less afraid of surgery than children, the impact of this fear can be just as significant for both. The fear of surgery, no matter who has it, can be detrimental to the patient if they are not properly cared for before surgery. 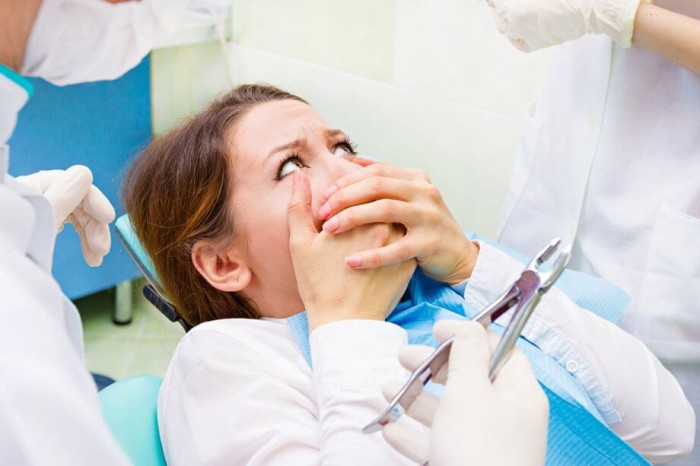 The fear of surgery is not the only fear-based on medical procedures that can be detrimental to the health of those who experience it; The fear of dental work can also be dangerous if taken to the extreme.

Dental fear has been ranked fifth among the most common fears. Those who start with dental anxiety when they are young and continue with it into adulthood can avoid all dental work altogether, causing problems for their health.

Dental fear in children varies between 3% and 21%, depending on age and the method used to measure dental anxiety [23]. “A very young child may find the smells of dental surgery and the sounds of equipment that works, ” said HR Chapman and NC Kirby-Turner [23]. Such overwhelming situations can make a child fearful, and if the fear is not corrected, it can be more challenging to engage the child in dental procedures. Some forms of treatment for children experiencing dental anxiety include allowing the family to enter the room with them to enable the child to see that other family members are not scared, allowing the child time to explore the space and the equipment used in them, under the supervision of the dentist,

When the fear of dental work is not overcome in childhood, it is most likely to continue into adulthood, causing visits to the dentist to be avoided, leading to poor hygiene and lack of proper care of teeth. Both age and gender differ significantly in the way people express and treat their fear of dental work.

In general, women express more fear of dental procedures than men. Although dental anxiety is more petite in men than women, men expect more pain from the system.

This expectation of pain leads many women to skip appointments and be unwilling to seek professional help for simple things like toothaches. These simple things can lead to more significant problems that result in decayed teeth and poor gum care.

Age also makes a difference in the way dental work is treated. Dental fear in young adults (18-23 years) is significantly higher than in adults (26-79 years), which shows that the fear of dental work decreases over the years with maturity.

Treatment of this medical fear is similar to that of adults afraid of surgery. Explanations of what is happening can help, as dentists who speak to patients with less embarrassing words encourage them to express and deal with their dental fear.

Fear of doctors and needles

Two of the most common fears of medical procedures are the fear of doctors and the fear of needles. When not overcome by patients, these simple fears, either by themselves or with medical help, can cause significant problems in the future for their health.

Fear of doctors People of all ages is afraid of doctors (iatrophobia). Children often express their anxiety by trying to hide from doctors when their parents bring them to check-ups or by avoiding going to the doctor by not telling their parents when they are not feeling well.

This child’s fear can easily be treated in the same way that doctors treat children in surgery. An explanation or example (such as watching the doctor examine an older sibling or stuffed animal) can help make the child more comfortable with what the doctor will do for him. The fear of doctors for adults can be a bit more extreme.

Avoiding visiting a doctor can lead to health problems in the short term and long term. There is a medical condition called white coat hypertension that is concerned with raising high blood pressure in the presence of doctors.

This high blood pressure is not suitable for health considerations, so this fear leads to further complications in the health aspects of life for those who suffer from it.

The fear of needles (called “needle phobia” in medical literature, but sometimes trypanophobia) is sometimes a complex condition that can cause serious health problems that can sometimes result in the patient’s death.

Some patients with needle phobia refuse to receive mandatory injections, leading to an increased risk of contracting certain diseases, and many avoid treatment for severe medical conditions.

Needle phobia is unique in that it is a phobia that has been documented to have directly resulted in the death of a few patients.