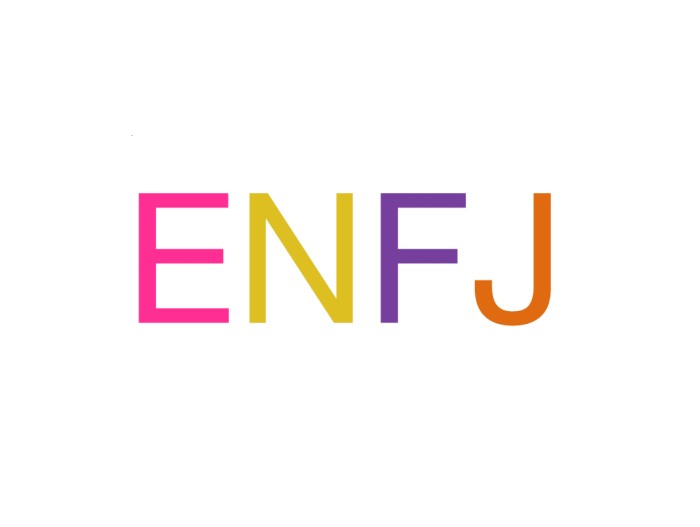 The ENFJ personality is one identified as benevolent “pedagogues” of humanity, they have a great charisma by which many are attracted by their tutelage and / or grand schemes. Many ENFJs have tremendous power to manipulate others with their phenomenal interpersonal skills and unique selling ability, but it is not generally understood as manipulation, they believe in their dreams and see themselves as helpers and enablers, which they generally are.

They are global students, they see the big picture, it is expansive, some can juggle an astonishing number of responsibilities or projects simultaneously, many have tremendous entrepreneurial skills.

What is the ENFJ personality?

ENFJs are idealistic organizers, driven to implement their vision of what is best for humanity.They often act as catalysts for human growth due to their ability to see the potential in other people and their charisma to persuade others to their ideas. They are focused on values ​​and vision, and they are passionate about possibilities for people.

They are natural teachers, they are organizing people to participate in some educational activity, they tend to take charge of a situation and guide a group towards those activities and experiences that will help them learn and grow, they intuitively see the potential in people, and with charisma and warmth, they encourage others to seek further development of their strengths. They are generally dynamic and productive, and often have visible energy as they guide others to discover new knowledge.

ENFJs are often good communicators, talented in using words to connect with others, they are perceptive with people and like to talk about relationships, they like to help others solve personal problems, and they like to share their ideas about relationships. people, their emotions and their motivations. They are empathic at times to the point of being over-involved, and can burn out if surrounded by too much negative emotion.

They are energetic and driven, attuned to the needs of others, and acutely aware of human suffering; however, they also tend to be optimistic and forward-thinking, intuitively seeing opportunities for improvement. The ENFJ is ambitious, but their ambition is not selfish: rather, they feel personally responsible for making the world a better place.

They are by definition, with whom we associate organization and decision, they are organized in the field of interpersonal affairs, their offices may or may not be crowded, but their conclusions (reached through feelings) about people and motives are drawn much more fast and are sturdier than their counterparts.

ENFJ knows and appreciates people, like most NFs, they tend to neglect themselves and their own needs for the needs of others, have thinner psychological boundaries than most, and are at risk of being hurt or even abused by less sensitive people, they often take on more of the burdens of others than they can bear.

Extraverted feeling governs the ENFJ psyche, in the domain of this rational function, these people are predisposed to closure in matters related to people, and especially on behalf of their loved ones. As extroverts, their contacts are varied, face-to-face relationships are intense, pleasant and warm, although they can be achieved infrequently so that close friendships are rare.

Like their INFJ cousins, ENFJs are blessed through introverted intuition with clarity of perception in the inner and unconscious world. The dominant sentiment prefers to find the silver lining even in the most perverted perceptions of those in its growing circle of friends and, of course, themselves. In less balanced individuals, such mitigation of impropriety eventually undermines ENFJ’s integrity and frequently its good name; in healthier individuals, the skillful use of this awareness of the inner needs and desires of others allows this crafty type to win friends. , influence people and avoid compromising entanglements.

The dynamic nature of your intuition moves ENFJs from one project to another with the assurance that the next will be perfect, or much more so than the last. ENFJs continually seek new and better solutions to benefit their extended family, staff, or organization.

ENFJs can manage details, particularly those necessary to implement the prevailing vision, this data has, however, a flexible magical quality, something that can be bought can be had for a song; the very something is invaluable when it comes time to sell. (We are not sure, but we suspect that such is the influence of the main function.) This hesitation of sensory perception is possible thanks to the weaker and less mature state with which the tertiary is granted.

The thought introvert is less obvious and more mysterious in this, in fact, often appears only when invoked by feelings. Sometimes only in joke, but seriously if necessary, thinking entertains as logical only those conclusions that support the values ​​of feelings, other scenarios may prove invalid or, in the best of cases, significantly inferior, such «Thinking at the service of feeling ‘has the appearance of logic, but somehow never adds up.

ENFJs are true team players and recognize that this means listening to other people’s opinions, even when they contradict their own, admit that they don’t have all the answers, and are often receptive to dissent as long as it remains constructive.

What irritates ENFJs the most is the idea of ​​defrauding a person or making them believe, if possible, ENFJs can always be counted on to carry it out.

Charm and popularity are qualities ENFJs have in abundance – they instinctively know how to engage an audience and perceive mood and motivation in a way that allows them to communicate with reason, emotion, passion, and restraint, whatever it takes. Whatever the situation calls for, talented imitators, ENFJs can change their tone and manner to reflect the needs of the audience, while maintaining their own voice.

Bringing these qualities together is ENFJ’s unwavering desire to do good in and for their communities, whether in their own home or on the global stage. Warm and selfless, ENFJs genuinely believe that if they can bring people together, they can do a world of good.

Rather than seeking authority themselves, ENFJs often end up in leadership roles at the request of others, encouraged by the many admirers of their strong personality and positive outlook.

People with the ENFJ personality type may be caught off guard when they discover that by circumstances or by nature, or by simple misunderstandings, people are fighting against them and challenging the principles they have adopted, however well intentioned they are, they are more likely to feel sorry for this opposition rather than anger, and you may earn a reputation as naive.

ENFJs can bury themselves in their promises of hope, feeling the problems of others as their own and striving to keep their word, if they are not careful they can become too scattered and unable to help anyone.

While it is receptive to criticism, seeing it as a tool to lead a better team, it is easy for ENFJs to take it too seriously, their sensitivity towards others means that ENFJs sometimes feel problems that are not their own and try to fix things they can’t fix, worrying if they’re doing enough.

ENFJs define their self-esteem according to whether they are able to live up to their ideals, and sometimes they ask for criticism more out of insecurity than distrust, always wondering what they could do better, if they fail to reach a goal or help someone they say they could. help, their self-confidence will undoubtedly plummet.

If caught between a rock and a hard place, ENFJs can be paralyzed and imagine all the consequences of their actions, especially if those consequences are humanitarian.

This phase is characterized by the emergence and differentiation of the ENFJ’s dominant function, the extraverted feeling. Developed and strengthened, they can appear inflexible and stubborn, quick to make judgments and draw conclusions about the world. Since their judgments have not yet been weighed and balanced by their Auxiliary Ni, they are prone to jumping to conclusions.

As extraverted feeling is a rational evaluation function, ENFJs tend to take themselves and their lives quite seriously.Even from a relatively young age, they are self-disciplined and goal-oriented, striving for excellence in everything they do. , may differ markedly from INFJs in this phase, whose dominant function introverted intuition is a perception function, suggests that INFJs are more open and take life less seriously than Phase I ENFJs tend to do, while Since both types use feelings, INFJs are more interested in ingesting and digesting the world, while ENFJs are already working to change or control it.

Once your dominant extraverted feeling reaches a certain threshold of strength and dominance, the lower ENFJ function, Introverted Thinking, enters the picture and begins to play a more influential role, this can be confusing because you are not next in line. your functional list. His undue influence derives from his ENFJ dominant bipolar relationship, somewhat unfortunate than the influence of the lower peaks in Phase II, when most people make life-changing decisions about their careers and relationships.

In addition to the growing presence and influence, Phase II ENFJs are also developing their auxiliary function, Introverted Intuition. As they encounter complex problems and situations that require greater patience and reflection, they become increasingly able to grasp and incorporate the bigger picture into their feeling process, it can also force them to rescind or revise some of their earlier premature judgments.

Phase II ENFJs can also begin to differentiate and incorporate their tertiary function, extraverted detection, for ENFJs it represents greater relaxation and openness of their judgments, it helps them loosen their control over life, attenuating their need for constant external control. , they acquire more qualities of perception, showing more openness, flexibility and acceptance.

If all goes well and they are fortunate enough to enter Phase III, ENFJs become increasingly aware of the insidious manifestations of their lower thinking, as they increase their lower awareness and learn to function more authentically as ENFJs, they experience greater balance. Between their feeling and thinking, they learn that integration occurs naturally and indirectly as they authentically use and soften their judgments and need for control. As they cultivate the conditions that support their natural strengths, Phase III ENFJs come to experience an intensified and lasting sense of peace, wholeness, and satisfaction.

E, N, F and J: What does your personality type code mean?

E (Extraversion): Receives energy from other people or external experiences, as revealed by your preference for extraversion (sometimes spelled extraversion). You enjoy and do well in situations where you can interact with others.

N (iNtuition):  Intuition is like a sixth sense that allows you to visualize beyond what you can see, hear, smell, taste and touch. It gives you the ability to consider future possibilities and ultimately take advantage of those opportunities.

F (Feeling):  As someone who feels, you often make decisions based on your personal values. You are inclined to move on without fully considering the consequences of your actions, you are sensitive to the needs of others, which makes you a caring person who likes to help people.

J (Judge): Your preference for judging indicates that you would like to have all your ducks in a row, spontaneity makes you uncomfortable, you succeed when you have deadlines to meet.

One of the things you should know about your preferences is that they are not absolute, while you can favor a preference in one pair, if the situation requires the use of the other, you can, you should also keep in mind that the four preferences interact with each other. , so each personality type is unique. Finally, your preferences may change as you go through life.