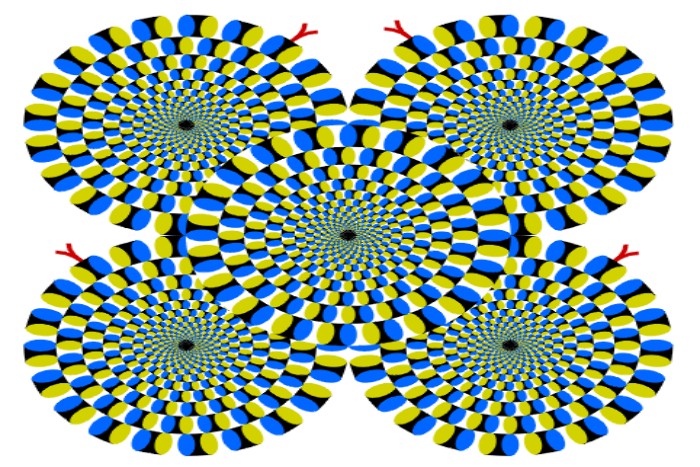 When we move in the world, the patterns of light that fall on our retinas constantly change due to our self-movement, the movement of our eyes and the objects around us, that is what the perception of movement is all about . Researchers are interested in understanding how the brain extracts and processes different types of movement information, such as movement caused by our own movements (“optical flow”), the movement of moving objects, and also that of other people.

What is the perception of movement?

It is the process of inferring the speed and direction of moving objects in a visual scene given some visual input.

While this process appears straightforward to most observers, it has been shown to be a difficult problem from a computational perspective, and extraordinarily difficult to explain in terms of neural processing.

The perception of movement has connections to both neurology (that is, visual perception) and computer science.

Movement is an attribute of perception, the visual system deduces movement from the changing pattern of light in the image of the retina, often the inference is correct and sometimes it is not.

Factors that make up the perception of movement

Speed, size and distance are the factors that help this type of perception to be achieved.

When an object is moving at high speed, its movement becomes invisible, for example, it is difficult to perceive the movements of the wings of a fan when it is running, or a bullet when it is fired due to speed. If the stimulus is too slow, its movement cannot be detected, for example we know that our children or plants are growing but we cannot detect their progress movement.

In addition to speed, the size of the moving stimulus is also very important: an extraordinary large or small stimulus moves at the same speed, its perception of movement cannot be the same. The movement of a very small object is detectable if they move slowly, but it is not so with a very large or gigantic stimulus, for example the movement of the earth is not detectable due to its size.

Distance also plays an important role in the perception of movement, aircraft that fly very high seem to fly slowly when reality is not that. The phi phenomenon cannot be established if the distance between two lights is increased.

The movement can be divided into two types:

When objects or stimuli actually change their position over time, it is known as a real movement, whether this movement can be registered or not. The movements of humans, animals and other vehicles are easily observed, but a bullet fired from a firearm is not and the movement of the clock hands can be easily observed.

This is another type of movement that is due to a higher level organizing procedure for perception called apparent movement. It is when the stimulus does not change its position with the passage of time but seems to move, the phenomenon phi and the autokinetic effect is the example of apparent movement that occurs when two stationary points of light in different positions in the visual field are turned on and off alternately at a rate of approximately 4 to 5 times per second. The autokinetic effect is another way, a single immobile stimulus is seen as movement.

What distinguishes movement from other sensations?

What distinguishes movement from other sensations is the fact that, unlike all others, it appears to be objective in character, susceptible to the physical methods that have been so successful in interpreting and changing the world.

Unlike sight (objects have no color), sound, taste, or touch, all of which obviously only make sense to living organisms, movement appears to be real enough to transcend form of subjectivity. Who could imagine a world without movement?

Philosophers have no problem imagining zombies that would lack all the indicated sensations, but such zombies would not need to do anything different from living creatures when it comes to moving objects.

Do we really need such a sense to explain how living brains process movement? I will not attempt to define movement as a physical phenomenon, which is well above my pay grade. Instead, I’ll try to describe it as a subjective, familiar feeling.

Importance of the perception of movement

We have at least two needs for the perception of movement: one, to make sense of the world as we go through the movement itself, and two, to understand the objects that move above us . Most of the time, of course, both needs come into play simultaneously, however it is puzzling how easily we can normally distinguish between the movement of objects and our own movements though, as far as the image of the retina is concerned , there doesn’t seem to be enough information to do it.

In their comprehensive review of aspects of visual movement analysis from a computational perspective, Hildreth and Koch (1987) note that:

Typically, the general analysis of movement is divided into two stages: first, the measurement of movement in the changing two-dimensional image, and second, the use of movement measurements, for example to recover the 3-D design of the environment. It is not clear whether the analysis of motion in biological systems is necessarily done in two distinct stages, but this division has served to facilitate theoretical studies of motion analysis and to focus empirical questions on perceptual and physical studies.