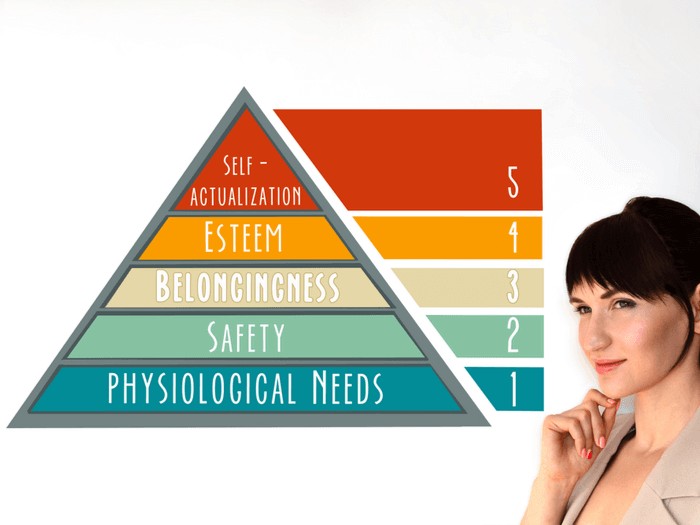 Maslow’s hierarchy of needs is a motivational theory in psychology that includes a model of five levels of human needs, often represented as hierarchical levels inside a pyramid. It establishes that people have a hierarchy of needs that they will satisfy from the bottom up, starting from mere physiological subsistence. It includes belonging to a social circle to pursue their talent through self-realization. Essential to the theory is that Maslow felt that unmet needs on the lower scale would inhibit the person from moving up to the next rung.

What is Maslow’s hierarchy of needs theory?

While modern research shows some shortcomings with this theory, Maslow’s Hierarchy of Needs Theory remains an essential and straightforward motivational tool for managers to understand and apply.

Maslow founds his pyramid with physiological needs such as food, shelter, and sleep, followed by security needs, including financial and job security. He states that these basic needs must be met before mid-level needs, such as belonging, love, and self-esteem.

In the 1950s, a psychologist named Abraham Maslow developed a theory called the hierarchy of needs; he was one of the founders of humanistic psychology, which emphasizes the individual’s potential and emphasizes the importance of growth and self-actualization. The theory grew out of his interest in developing a psychology that was not based on clinical studies but focused on average human growth and development.

Maslow developed a list that classifies all needs into five general groups. Most importantly, he claimed that there was a hierarchy of these five groups of requirements regarding their importance to human development. The higher needs at the top of the scale were the most important for personality development. However, these higher needs could not be satisfied until the lower or deficiency needs are met, such as physiological and security needs. If two different conditions conflict, the lesser market would dominate.

What are the needs within the hierarchy?

Maslow’s hierarchy of needs is often represented in a pyramid, with the most significant and most fundamental needs at the bottom and the need for self-actualization and self-transcendence at the top.

The human brain is a complex system and has parallel processes running simultaneously, so many different motivations from various levels of the hierarchy. Maslow spoke clearly about these levels and their satisfaction in terms such as “relative,” “general,” and “primarily,” rather than claiming that the individual focuses on a specific need at a given time, he claimed that a particular market “dominates” the individual. Therefore, the human organism recognized the probability that different levels of motivation could occur at any time in the human mind but focused on identifying the basic types of inspiration and the order in which they would tend to meet.

Physiological needs are the physical requirements for human survival. If they are not met as they should be, the body cannot function properly and healthily, which can ultimately cause it to fail. They are believed to be the most important; they must be found first.

In the absence of economic security, due to financial crises and lack of job opportunities, these security needs manifest themselves in preference for job security, complaint procedures to protect the individual from unilateral authority, savings accounts, insurance policies, disability accommodation, etc. This level is more likely to predominate in children, as they generally have a greater need to feel safe.

After physiological and safety needs are met, the third level of human needs is interpersonal and involves feelings of belonging. This need is extreme in childhood and can override the need for security seen in children who cling to abusive parents. Deficiencies within this level of Maslow’s hierarchy due to hospitalization, neglect, rejection, ostracism, etc., can negatively affect the individual’s ability to form and maintain emotionally significant relationships.

All humans need to feel respected. This includes the need to have self-esteem and self-respect. Esteem presents the typical human desire to be accepted and valued by others. People often engage in a profession or hobby to gain recognition. These activities give the person a sense of contribution or value.

Low self-esteem or an inferiority complex can result from imbalances during this level in the hierarchy. People with low self-esteem often need the respect of others. They may feel the need to seek fame or glory. However, they will not help the person develop their self-esteem until they accept who they are internal. Psychological imbalances such as depression can prevent a person from obtaining higher self-esteem or self-esteem.

Most people need self-esteem. Maslow pointed out two versions: a “lower” version and a “higher” version. The “lower” version of esteem is the need for respect from others. This may include a requirement for status, recognition, fame, prestige, and attention. The “superior” version manifests itself as the need for self-respect. For example, the person may need strength, competence, dominance, self-confidence, independence, and freedom; this “superior” version takes precedence over the “inferior” version because it is based on an internal competence established through experience. Deprivation of these needs can lead to an inferiority complex, weakness, helplessness, etc.

Maslow states that while he initially thought that human needs had strict guidelines, “hierarchies are interrelated rather than separate,” meaning that esteem and subsequent levels are not strictly separate; instead, the stories are closely related.

Rather than focus on psychopathology and what goes wrong with people, Maslow formulated a more upbeat version of human behavior that focused on what goes right. He was interested in human potential and how we fulfill that potential.

Psychologist Abraham Maslow stated that human motivation is based on people seeking satisfaction and change through personal growth. Self-actualized people have realized themselves and have done all they could.

The growth of self-actualization refers to the need for personal growth and discovery throughout a person’s life. For Maslow, a person is always “becoming” and never remains static in these terms. In self-realization, a person finds meaning in life that is important to them.

As each individual is unique, the motivation for self-actualization takes people in different directions. For some people, self-actualization can be achieved through creating works of art or literature. Through sports, in the classroom, or within a corporate environment, for others.

It is important to note that self-actualization is a continual process of becoming more than a perfect state from a “happily ever after.”

Although we are all theoretically capable of self-actualization, most of us will not, or only to a limited degree. Maslow estimated that only two percent of people would reach the state of self-actualization. He was especially interested in the characteristics of people he considered to have achieved their potential as individuals.

1. They perceive reality efficiently and can tolerate uncertainty.

2. Accept themselves and others for who they are.

3. Spontaneous in thought and action.

6. Able to look at life objectively.

8. Resistant to enculturation, but not deliberately unconventional.

9. Concerned for the welfare of humanity.

11. Establish deep and satisfying interpersonal relationships with some people.

Critique of Maslow’s Hierarchy of Needs

While some research showed some support for Maslow’s theories, most research has failed to substantiate the idea of ​​a hierarchy of needs; Wahba and Bridwell reported that there was little evidence for Maslow’s classification of these needs and even less evidence that these needs are in a hierarchical order.

Other critics of the theory point out that his definition of self-actualization is difficult to prove scientifically. His research on self-actualization also relied on a minimal sample of individuals, including people he knew, and biographies of famous people that Maslow believed were self-actualizing.

Despite these criticisms, Maslow’s hierarchy of needs may represent part of a fundamental shift in psychology. Instead of focusing on abnormal behavior and development, it focused on developing healthy individuals. While there was relatively little research to support the theory, the hierarchy of needs is well known and popular both within and outside psychology. In a study published in 2011, researchers at the University of Illinois set out to put the hierarchy to the test.

They found that if the fulfillment of needs was strongly correlated with happiness, people from cultures around the world reported that self-actualization and social conditions were significant even when many of the most basic needs were not met.

Such results suggest that if these needs can be powerful motivators of human behavior, they do not necessarily take Maslow’s hierarchical form.