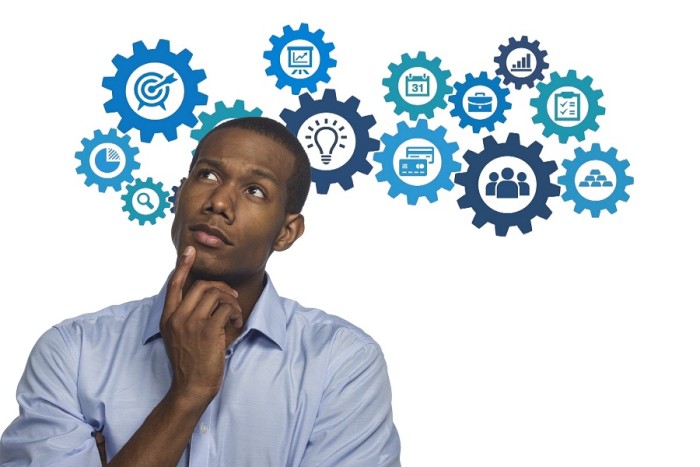 In everyday life it is common to hear someone say, “I just thought of X or Y” or “The thought just occurred to me.” For example, one can think of an event that took place during the last weekend. Thoughts can resemble an idea, memory- like, picture-like, or song-like, they are usually brief, discrete events, as opposed to continuous events like the constant hum of air conditioners and rain. . We all experience thoughts and have no trouble identifying them and talking about them to others.

Generally refers to any mental or intellectual activity that involves the subjective consciousness of an individual, it can refer to the act of thinking or the resulting ideas or arrangements of ideas. Similar concepts include cognition, sensitivity, awareness, and imagination.

Because thought underlies many human actions and interactions, understanding its physical and metaphysical origins, processes and effects has been a goal of many academic disciplines such as linguistics, psychology, neuroscience, philosophy, artificial intelligence, biology , sociology and cognitive science.

Thought enables humans to understand, interpret, represent, or model the world they experience and make predictions about that world. Therefore, it is useful for an organism with needs, goals and desires, as it makes plans or tries to achieve them.

Also known as convergent thinking, it is a critical component of visual thinking that gives one the ability to solve problems quickly and effectively, it involves a methodical step-by-step approach to thinking that allows you to decompose complex problems into single, manageable components.

The analytical thinking involves the process of gathering relevant information and identify key issues related to this information, this kind of thinking also requires that compare sets of data from different sources; identify possible patterns of cause and effect, and draw appropriate conclusions from these data sets in order to arrive at appropriate solutions.

Also known as lateral thinking, it is the process of creating multiple and unique ideas or solutions related to a problem you are trying to solve. It is similar to brainstorming in that it involves coming up with many different ideas to solve a single problem, many tests that are used to measure creativity, such as the alternative use test and the incomplete figure test, have been found to measure the divergent thinking. When you use divergent thinking , you are looking for options rather than just choosing from those that are already available, it works best for open problems, and it involves creativity.

It means making reasoned judgments that are logical and well thought out, it is a way of thinking in which you not only accept all the arguments and conclusions to which you are exposed, but also have an attitude that involves questioning those arguments and conclusions. It requires wanting to see what evidence is involved to support a particular argument or conclusion. People who use critical thinking are the ones who say things like, How do you know? Is this conclusion based on evidence or gut feelings? and Are there alternative possibilities when new information is given?

The creative thinking means looking at something in a new way. Creativity in this sense often involves what is called lateral thinking, or the ability to perceive patterns that are not obvious. The fictional detective Sherlock Holmes used lateral thinking in a famous story when he realized that a non-barking dog was an important clue in a murder case.

The point of view is the angle of considering things, which shows us the opinion or feelings of the people involved in a situation. It is a reflection of the opinion that an individual has of real life or fiction.

A person standing in one place moving to another will find that things look different from each of the two places. Two people standing in different places who are looking at the same thing will see the thing differently, so the point from which a person sees something affects the information that is received and how the thing looks.

The need for purpose is one of the defining characteristics and elements of human beings and thought, as we always yearn for purpose and suffer serious psychological difficulties when we do not have it. Purpose is a fundamental component of a fulfilling life and the reason why we have something in mind.

Always through our minds there are infinite questions about something that interests us or that is important to us and where some of these questions we can easily get the answer that we want so much or perhaps we should investigate much more. These kinds of complicated questions somehow help us to know more than we really wanted.

Concepts are the fundamental pillars of our thoughts and beliefs. They play an important role in all aspects of cognition. When the mind makes a generalization, such as the concept of a tree, it draws similarities from numerous examples; simplification allows high-level thinking.

Concepts arise as abstractions or generalizations of experience, the result of a transformation of existing ideas or innate properties. A concept is exemplified by all of its actual or potential instances, be it these things in the real world or other ideas.

They are studied as components of human cognition in the cognitive science disciplines of linguistics, psychology, and philosophy, where an ongoing debate asks whether all cognition should occur through concepts. They are used as formal tools or models in mathematics, computing, databases, and artificial intelligence, where they are sometimes referred to as classes, schemas, or categories. In informal usage, the word concept often simply means any idea.

It is the answer to a question of some kind, therefore it is related to data and knowledge, since data represents the values ​​attributed to parameters, and knowledge means understanding of real things or abstract concepts. As for the data, the existence of the information is not necessarily coupled to an observer, while in the case of knowledge, the information requires a cognitive observer.

Information can be encoded in various ways for transmission and interpretation, it can also be encrypted for secure storage and communication.

It is the act of explaining, rephrasing, or showing your own understanding of something. A person who translates one language into another is called an interpreter because they are explaining what a person is saying to someone they do not understand. Interpretation requires that you first understand the piece of music, text, language, or idea, and then give your explanation about it. A computer can produce large amounts of data, but it will require its interpretation of the data for people to understand it.