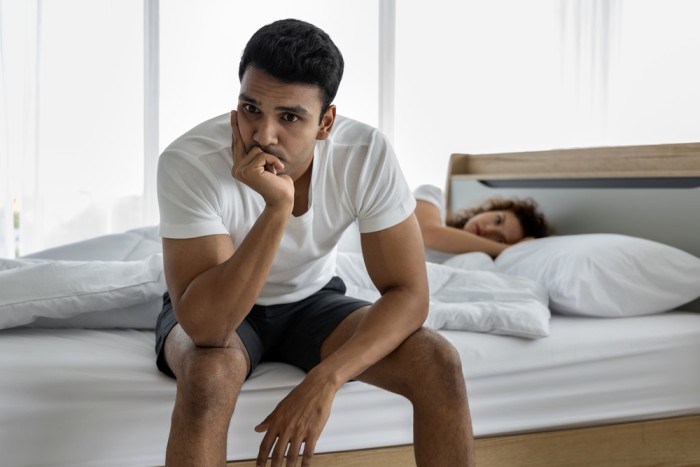 Approximately 20 to 30 percent of men experience premature ejaculation and this often embarrassing sexual problem can affect men of any age. It is more common than most people think and can cause emotional and psychological distress and problems, as well as problems with self-esteem.

As difficult as it may be to address the problem with your partner or even your doctor, talking about premature ejaculation is the key to overcoming it. Read on to find out exactly what it is and how you can treat it.

What is the premature ejaculation?

It is a sexual dysfunction that occurs when a man experiences an orgasm and expels semen shortly after sexual activity and with minimal stimulation of the penis, it has also been called rapid ejaculation, rapid climax and premature climax.

There is no uniform cutoff that defines “premature,” but a consensus of experts from the International Society for Sexual Medicine endorsed a definition of about one minute after penetration. The International Classification of Diseases (ICD-10) applies a limit of 15 seconds from the beginning of sexual intercourse.

Although men with premature ejaculation describe that they feel they have less control over ejaculation, it is unclear if that is true, and many or most average men also report that they wish they could last longer. The typical ejaculatory latency for men is about 4-8 minutes, the opposite condition is delayed ejaculation.

Men with this problem often report relationship and emotional distress, and some avoid seeking sex because of embarrassment. Compared to men, women consider it to be less of a problem, but several studies show that the condition also causes distress for female partners.

The exact cause is unknown, but it is rooted in physical, psychological, or emotional problems. much of this is psychological. Men who suffer from premature ejaculation ejaculate quickly during or sometimes before sex.

For many years it was thought that the cause of all cases was a behavioral learning disability , research now shows that premature ejaculation can be caused by a variety of factors.

When a man has sex for the first time, he is so aroused that he ejaculates without fully understanding what is happening, this is natural but with time and exercise, the average man will learn to recognize the feelings of arousal that precede orgasm, which leading to the development of control over the ejaculatory reflex.

In many men who experience premature ejaculation, there was some kind of alteration or interruption in their natural learning process, this interruption made them not recognize their point of no return. Because of this, they are unable to prolong the stage, delay orgasm, and exert control over their ejaculatory reflex, this problem frequently develops due to stressful environments surrounding adolescent sex. For example, having sex while parents or other family members are at home, or at a party when others are outside the bedroom door.

Serotonin is a chemical in the brain that is popularly believed to contribute to feelings of well-being and happiness. Recent studies have revealed a lower level of serotonin in men who suffer from premature ejaculation compared to men who experience a more standard sexual process.

Psychological factors can directly cause it or worsen existing cases. The most commons are:

Sexual performance anxiety . Anxiety surrounding sex can stem from negative thoughts, sexual inexperience, bad sexual experiences, the stress of trying to perform or trying to impress a partner, and a lack of sex education or unrealistic expectations of sex (which can be caused by a number of problems, including a conservative upbringing, or viewing pornography at a young age).

Stress. Problems in a variety of areas of life can cause stress, which can manifest as premature ejaculation. Work, finances, new relationships, and relationship problems are common examples, deep psychological problems can include sexual abuse, depression, anxiety, and low self-esteem.

Men who suffer from depression are more likely to have difficulties, as are men who regularly exceed the recommended daily alcohol limit.

In some cases, premature ejaculation can be caused by more serious underlying medical conditions, these include high blood pressure, diabetes and multiple sclerosis, prostate disease, and hypothyroidism (having an underactive thyroid gland).

Medically, the most persistent primary or lifelong form is defined by the presence of the following three characteristics:

Psychological symptoms are secondary to physical ejaculatory events. The man, his partner, or both can experience them.

Men who ejaculate too early may experience psychological distress, but the results of a study of 152 men and their partners suggest that the partner tends to be less concerned than the man who has it.

How does ejaculation work?

Ejaculation is controlled by the central nervous system, when men are sexually stimulated, the signals are sent to their spinal cord and brain, when they reach a certain level of arousal, the signals are sent from their brain to their reproductive organs, this makes semen to be released through the penis (ejaculation). It has 2 phases: emission and expulsion.

Ejection is when the muscles at the base of the penis contract, this forces the semen out of the penis. Usually ejaculation and orgasm (climax) occur at the same time, some men climax without ejaculating. In most cases, erections go away after this step.

Men suffering from premature ejaculation are often desperate for help or a cure, they will try almost anything. Most treatment methods focus on the brain or penis.

Many men try to treat themselves, for example, by trying to focus their attention away from sexual stimulation. There is little evidence to suggest that it is effective and that it tends to undermine sexual satisfaction for both parties. Other self-treatments include thrusting slowly, withdrawing the penis completely, intentionally ejaculating before intercourse, and using more than one condom.

In the 21st century, most men with premature ejaculation could heal themselves or with a partner, using self-help resources, and only those with unusually severe problems had to consult sex therapists, who cured 75 to 80 percent.

Freudian theory postulated that rapid ejaculation was a symptom of the underlying neurosis, stated that the man suffers unconscious hostility towards women, so he ejaculates quickly, which satisfies him but frustrates his lover, who is unlikely to experience the orgasm so fast. Freudians claimed that premature ejaculation could be cured using psychoanalysis , but even years of psychoanalysis accomplished little, if any, in curing premature ejaculation.

There is no evidence that men with premature ejaculation have unusual hostility towards women.

Sex therapists have developed and applied several techniques, including Kegel exercises (to strengthen the pelvic floor muscles) and the Masters and Johnson Stop-Start technique (to desensitize the man’s responses) and the compression technique (to reduce arousal).

To treat premature ejaculation, Masters and Johnson developed the ‘compression technique’, where men were instructed to pay close attention to their pattern of arousal and learn to recognize how they felt, shortly before their ‘point of no return’. the moment when ejaculation felt imminent and unavoidable, feeling it should point to his partner, who squeezed the head of the penis between thumb and forefinger, suppressing the ejaculatory reflex and allowing the man to last longer.

The compression technique worked, but many couples found it cumbersome. From the 1970s to the 1990s, sex therapists refined the Masters and Johnson approach, largely abandoning the compression technique and focusing on a simpler and more effective technique called the “stop and start” technique. During intercourse, when the man senses that he is approaching climax, both of them stop moving and remain still until the man’s feelings of ejaculation subside, at which point they can resume intercourse.

These techniques appear to work for about half of the people, in short-term studies that began in 2017.

Medications that increase serotonin signaling in the brain decrease ejaculation and have been used successfully to treat this problem, these include selective serotonin reuptake inhibitors (SSRIs), such as paroxetine or dapoxetine, as well as clomipramine. Delayed ejaculation usually begins within a week of starting the medication.

Treatments increase ejaculatory delay to 6-20 times longer than before medication. Men report being satisfied with drug treatment, and many discontinue it within a year, however SSRIs can cause various types of sexual dysfunction, including anorgasmia, erectile dysfunction, and decreased libido.

Topical desensitizing medications such as lidocaine applied to the tip and shaft of the penis can also be used, these are applied ‘as needed’ 10-15 minutes before sexual activity and have fewer potential systemic side effects compared to the pills. The use of topical products is sometimes not liked due to the reduction of sensitivity in the penis, as well as for the partner (due to the rubbing of the medication on the partner).

Two different surgeries are available to permanently treat premature ejaculation: selective dorsal neurectomy (NDS) and glans penis enlargement using a hyaluronan gel. Both treatments were developed in South Korea and are quite common in this country, with 72.9% of Korean urologists considering them to be safe and efficient treatments.

Over-the-counter topical anesthetic creams contain an anesthetic agent that can treat premature ejaculation by reducing sensation and delaying climax. Apply the cream to your penis 10 to 15 minutes before sex to make it more effective. The 2017 Sexual Medicine study found that topical creams can help increase ejaculation time by a few minutes. Although they can cause:

Not only does zinc support healthy immunity and cell growth, the essential mineral also helps produce testosterone and also increases your libido and energy. Research has found a link between zinc deficiency and sexual dysfunction in men, so taking 11 milligrams of zinc per day, the recommended amount, can improve ejaculation time.

A 2009 study conducted on rats showed that zinc supplements can increase testosterone, which can improve sexual problems, such as premature ejaculation. However, taking too much zinc can cause:

In addition to zinc, magnesium also plays a role in your sexual health and may play a role in premature ejaculation, research shows incorporating foods into your diet that are rich in zinc and magnesium can help increase the time it takes you to climax. Those foods include:

Strengthening your pelvic floor muscles can have a big impact on how long it will take you to climax. A 2014 study in Therapeutic Advances in Urology found that these exercises can help men facing lifelong premature ejaculation control their ejaculatory reflex, increasing the time it takes for them to climax. To perform pelvic floor exercises:

Avoid sex for a period of time

This may seem counterintuitive, but focusing on other types of sexual activity rather than having sex can help take the pressure off your intimate encounters. Penetration is not the only way to achieve sexual satisfaction, so think of other ways that you and your partner can feel pleasure that does not cause you distress or frustration.